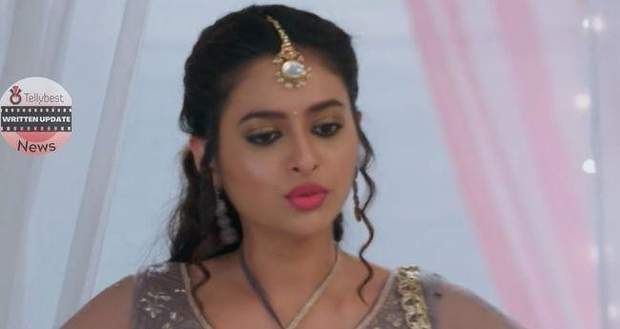 Feeling alone and confused, Akshara and Abhimanyu wonder about calling each other and refrain from it as there is no relation between them.

The next morning, Suhasini wards off the evil eye from Aarohi while the rest of the members also join them except for Manish and Akshara.

Meanwhile, Abhimanyu is making Neil ready and wonders if Akshara will come or not.

At the Goenka house, Kairav tries to convince Manish and Akshara to let go of the past differences and move on.

Meanwhile, Aarohi taunts Akshara for not being happy for her while Akshara tells her that knowing her intentions behind her marriage she cannot support her but prays that she stay happy in her life.

She once again tells Aarohi that he will not let her fulfil her plans.

Before leaving, Suhasini tells Akshara and Manish to come and join them whenever they feel they can.

Meanwhile, Abhimanyu is busy looking after the preparations and asks Manjari if everything looks right.

Anand tells Parth about the strangeness of Abhimanyu making preparation to wed his brother to a girl who was once selected for him.

Manjari meaningfully tells him that everything does not look right and should be put to the right at the earliest.

Later, Abhimanyu is waiting for Akshara when gifts from Goenka’s arrives via staff.

Abhimanyu spots Akshara’s bracelet attached to one of the gifts and gets irritated to find it.

Just then Aarohi comes with her family while Abhimanyu eyes search for Akshara.

Birlas comes to welcome the Goenkas while Mahima taunts Kairav for being shameless enough for coming to this house.

After a while, Neil and Aarohi thank their family for accepting their decision.

Just then Abhimanyu feels Akshara coming to the house.

Seeing Aarohi’s surprise, Akshara tells them that she has brought the ring that was left behind.

Meanwhile, Akshara recalls her real reason for coming to the Birla house which is to get her hands on Aarohi’s papers which will be delivered to her at the Birla house.

After a while, Nishtha tells Aarohi that Neil has prepared something for Aarohi which makes Aarohi happy.

Bringing a bowl of colour, Nishtha tells Aarohi and Neil to put their hand prints on the canvas to officially welcome Aarohi into their home.

Just then Aarohi gets a call and tells Atul (lawyer friend) that he has gotten late and tells her that she will call him after reaching home.

In the meantime, Akshara comes after Aarohi and questions her for calling someone at home when she is here.

© Copyright tellybest.com, 2022, 2023. All Rights Reserved. Unauthorized use and/or duplication of any material from tellybest.com without written permission is strictly prohibited.
Cached Saved on: Monday 21st of November 2022 06:55:38 AMCached Disp on: Tuesday 29th of November 2022 10:48:39 AM