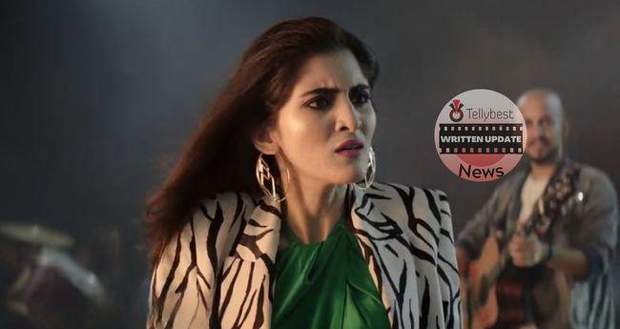 Later, Maaya insists Akshara on staying to hear the song as she asks to leave.

As the song is being played, both Akshara and Dr Kunal get busy with other things.

Just then Akshara stands to leave but freezes to see Abhimanyu on the screen while tears flow down her cheeks.

Dr Kunal also turns to the TV and is shocked to see Abhimanyu there.

Dr Kunal gets another shock knowing that the Mauritius Gala Finale is happening in Jaipur.

In the meantime, Abhimanyu beats the reporter who persists in asking about Akshara.

On the other hand, Akshara’s emotions are everywhere seeing Abhimanyu after a year. She is pleased to see him well and performing surgeries like before and understands that his anger is justified for he does not know her reasons for leaving him.

Yet, she asks him to wait for her return.

Just then Dr Kunal comes to tell Akshara about the location of the finale and is worried to take Maaya there.

Akshara is shocked to hear the news while Dr Kunal is anxious and does not want to go there.

However, Maaya’s willfulness scares him and he makes the decision to go there.

Hearing Kunal, Akshara tells him that she cannot go to India now.

Dr Kunal does not understand Akshara’s hesitation and asks her what could be better for her than to join her family after giving her last performance for Maaya at the Gala.

Dr Kunal assures her that Abhimanyu will also forgive her if he loves her the way she does.

However, Akshara refuses to go and tells him to not comment on her equations with Abhimanyu.

Meanwhile, Abhimanyu finds a secluded place to camp in the wild and goes to sleep thinking of Akshara.

While walking on the roads of Mauritius, Akshara recalls her last day in India when she had said goodbye to unconscious Abhimanyu, assuring him of her love and asking him to wait for her return.

© Copyright tellybest.com, 2020, 2021. All Rights Reserved. Unauthorized use and/or duplication of any material from tellybest.com without written permission is strictly prohibited.
Cached Saved on: Friday 30th of September 2022 05:43:37 PMCached Disp on: Saturday 1st of October 2022 05:00:07 PM