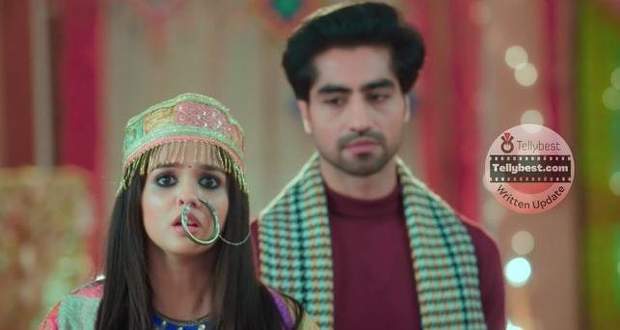 Today's Yeh Rishta Kya Kehlata Hai (YRKKH) 26th January 2023 episode starts with Abhinav telling Muskaan that his love story is not true nor does he know it will ever be.

Akshara’s words feel like a hammer in his heart.

Meanwhile, Parth tries to call Shefali and gets angry when she disconnects it every time.

In anger, he calls someone while imagining Shefali coming back on her knees.

Elsewhere, Shefali is sitting under a tree stone and wondering how her life has turned and now she cannot find a shred of the independent, confident, career-oriented girl that she used to be.

Just then, she gets a call from Shivansh who is asking her to forgive Parth and not fight with him as he does not want his parents to divorce like his friend's parents.

Shefali tells Shivansh to not worry as there is no fight between Mumma and papa and they will be waiting for him at home on his vacation.

Meanwhile, Abhimanyu cries to see Akshara completing someone’s else family photo instead of his.

Later, Shefali confronts Parth for involving Shivansh in this matter. She tells him that he has taken away her life, career, and friends and now he wants to turn her son against her as well.

However, Parth has no remorse and threatens to take Shivash away from her if she continues to show him attitude for he is a Birla and they are powerful beings.

In the meantime, Abhinav comes with a bottle of traditional drink to share with him as a mark of their friendship.

Abhimanyu tries to refuse him saying he cannot handle it but Abhinav insists saying that the case is the same with him.

Meanwhile, Manish and Swarna are dancing while Ruhi makes their video.

Just then Aarohi comes there enjoying Ruhi and Manish’s interaction.

Later, Aarohi tells Manish and Swarna gets worried on hearing that Abhimanyu is residing in Kasauli.

After Aarohi leaves, Manish expresses his concern about Abhimanyu coming back into Akshara’s life who has finally settled into her new life.

Swarna is also concerned but tells Manish that Abhimanyu and Akshara have not met each other.

Later, Abhimanyu tells Abhinav that he is going to miss him and his PJs. He tells him that what he will miss the most is the sweetest in the Himalayas.

Abhinav looks puzzled and asks him to be clear while Abhimanyu is about to take Akshara’s name but changes direction and tells Abhinav that he will miss his wife’s jam.

Abhinav agrees with him and asks him about the love of Abhimanyu’s life and if they ever faced each other after their separation.

Abhimanyu philosophically tells him that they never leave each other as their memories do not allow them to move forward and they stop in time.

Abhinav is sympathetic towards Abhimanyu and asks him if it was love at first sight while Abhimanyu describes how he fell for her voice and how his heart craves to hear that sound ever since he has to live without that voice.

Abhinav also shares being handed a wonderful life after hardships of life.

Abhinav also tells him that he is grateful to have him as a friend and promises to be friends for life.

Abhimanyu gets shocked and tells him that he cannot continue his friendship that long.

Abhinav gets worried and asks him why is he saying that.

Abhimanyu tells him that he is a thief and that is why he cannot be his friend.

Abhinav asks him what thieving is he talking about as he has never even stolen anyone’s prayer.

However, Abhimanyu tells him that he has stolen his luck, his happiness and his.. Akshara.

Abhinav looks puzzled at Akshara’s name while Abhimanyu turns his face to show him Akshara standing behind him.

© Copyright tellybest.com, 2022, 2023. All Rights Reserved. Unauthorized use and/or duplication of any material from tellybest.com without written permission is strictly prohibited.
Cached Saved on: Thursday 26th of January 2023 11:57:15 PMCached Disp on: Thursday 2nd of February 2023 08:47:02 PM