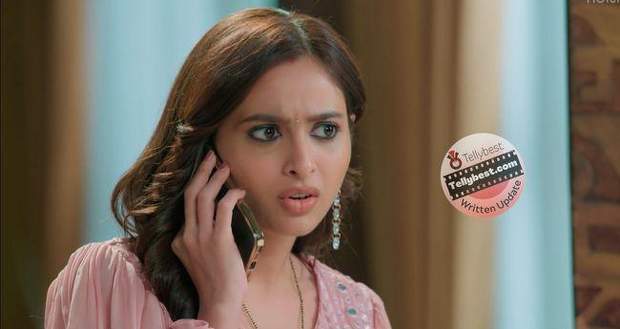 At the same time, Neil's voice booms in the hall while Abhimanyu says sorry to Arohi.

Arohi runs to Neil crying and hugs him tightly and blames Abhimanyu for slapping her.

Abhimanyu descends the stairs while both Neil and he are glaring at each other.

Neil accuses Abhimanyu of lying about slapping while the family members stand confused.

Abhimanyu explains that he was turning around but Akshara interrupts him asking Neil what has happened.

Neil accuses Abhimanyu of slapping Arohi but Abhimanyu refuses to accept it.

Akshara gets shocked and blatantly dismisses Arohi’s accusation and angrily asks Neil to clear the misunderstanding.

Meanwhile, Manish asks Abhimanyu to tell his side of the story and Abhimanyu retells the whole incident.

Everyone urges to put a full stop to the misunderstanding as Abhimanyu will never slap a woman.

However, Arohi instigates Neil by saying no one will listen to them so he takes a firm stand for Arohi.

When no one believes him, Neil asks Shefali as she also witnessed Abhimanyu slapping Arohi.

Everyone turns to Shefali and she reluctantly agrees that it seemed like Abhimanyu slapped Arohi.

Neil proves Abhimanyu guilty and orders him to apologize to Arohi but Abhimanyu says sorry for touching her cheek.

Abhimanyu refuses to apologize for the false accusation of slapping Arohi.

Manish defends Abhimanyu and asks Arohi about the truth but Arohi keeps up her act of a victim.

When Manish forces Arohi to tell the truth, Neil defends Arohi saying she’s the victim and no one can force her to change her statement.

Meanwhile, Arohi changes her words and blurts out about the file.

Arohi lies that she misunderstood Abhimanyu’s file as hers so she took it but he snatched it back.

However, Abhimanyu says he asked her for the file 4 times and also questions her for going to his room in the middle of the function.

Abhimanyu accuses Arohi of stealing while Arohi asks Abhimanyu what secret is hidden inside the file.

At the same time, Neil throws a nearby decoration and asks everyone if they believe Arohi or not.

When no one supports Arohi, Neil declares that today’s events have proved that their (Neil and Arohi's) existence was not needed on this earth as they are not their blood.

Manjari cries hearing Neil’s words as she loves him more than Abhimanyu.

At the same time, the police arrive and announce that an anonymous person has lodged a complaint against Abhimanyu for domestic violence.

Everyone gets shocked while Manish inquires about the person who lodged the complaint.

Meanwhile, Arohi recalls messaging her friend to call the police.

© Copyright tellybest.com, 2022, 2023. All Rights Reserved. Unauthorized use and/or duplication of any material from tellybest.com without written permission is strictly prohibited.
Cached Saved on: Saturday 26th of November 2022 11:30:04 PMCached Disp on: Tuesday 6th of December 2022 01:32:29 PM