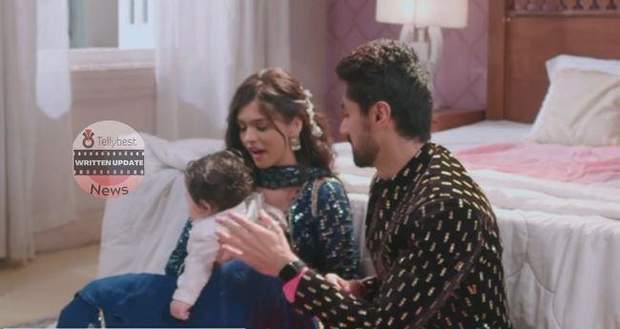 Today's Yeh Rishta Kya Kehlata Hai (YRKKH) 26th October 2022 episode starts with Nishtha telling Aarohi and Neil to put their palm prints on the frame as an official welcome and ask Manjari to put a date and time on the frame.

Meanwhile, Manjari’s saree is about to catch fire while writing and Abhimanyu and Akshara both jump to save her but spoil the palm prints in the process.

Later, both feel guilty while Neil tells them to let it go.

Both Akshara and Abhimanyu go to wash their hands while Neil follows Akshara, thanks her for coming, and insists on her staying.

After a while, AbhiRa together washes their hands while Abhimanyu looks at her longingly but Akshara avoids him and quickly goes back.

After the tilak ritual is done, Mahima asks to get done with the engagement too but Neil tells them that they should dance first.

Neil and Aarohi begin the dance and all joins in dancing to the beats of “Galla Goriyan”.

After the dance, Akshara and Abhimanyu offer the rings to Neil and Aarohi while Manjari goes to get the gold bangles.

Akshara comes after Manjari to ask after her but Manjari talks to her rudely and tells her to start calling her aunty now that she is divorcing Abhimanyu.

Akshara looks hurt and disappointed and goes away.

Harshvardhan overhears Manjari and asks her why is she being rude to Akshara.

Manjari is equally hurt by her own behaviour and tells him that as Akshara's mother, she will have to give bitter medicine to treat their illness.

Harshvardhan understands the reverse psychology that Manjari is applying to Abhimanyu and Akshara and prays that it works.

Meanwhile, Mahima threatens Kairav about his upcoming jail sentence which makes him panic.

Seeing Abhimanyu go upstairs, Manjari sends Akshara upstairs too so that they accidentally get together and talk.

After a while, Akshara is guessing that the envelope must be in Abhimanyu's room and that is why Manjari has sent her.

As Akshara was leaving, Alexa reminds Abhimanyu about his sleep and anxiety medicine.

Akshara gets shocked to know about Abhimanyu's ailment and cries about his helplessness.

Meanwhile, Abhimanyu comes to Shivansh room and gets worried seeing him cry. He takes him in his arm trying to comfort him while Nanny goes to get Shivansh's toy.

© Copyright tellybest.com, 2022, 2023. All Rights Reserved. Unauthorized use and/or duplication of any material from tellybest.com without written permission is strictly prohibited.
Cached Saved on: Monday 21st of November 2022 04:59:02 AMCached Disp on: Friday 9th of December 2022 04:06:20 AM