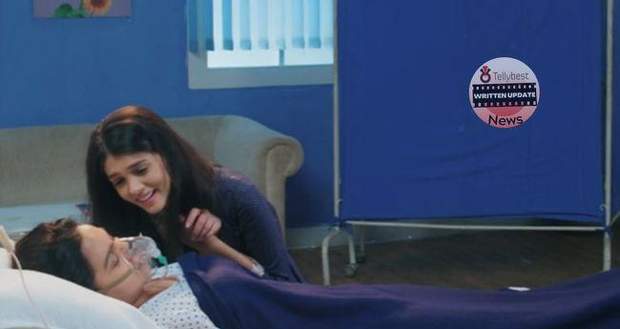 Today's Yeh Rishta Kya Kehlata Hai (YRKKH) 26th September 2022 episode starts with Akshara tells Abhimanyu that she was the one who was alone after leaving him while he was living in the bosom of his family living his life as a doctor.

She questions him for not asking her about her past year and her activities and assuming the worst about her.

Akshara also questions him for not trusting her during those twenty-four hours windows and for not calling to check on her when she did not hear from her after the given time.

She berates Abhimanyu for bringing the media to her house without knowing the truth and acting on his anger.

Akshara gives examples of Shiv-Parvati, Radha-Krishna and Ram-Sita to question him about the equality in relationships and care for each other and where is she in their relationship.

Abhimanyu also questions Akshara about where is she in their relationship. He asks her about not being by his side when he was still standing there while she ran away first for her sister and now for his brother.

Abhimanyu also questions AKshara’'s contribution in their relationship while Akshara stands silent unable to tell him about Dr Kunal’s condition.

Just then Suhasini arrives at Birla's house and tells Abhimanyu that she has his answer.

And yes she has taken Kairav with her but she has not left him because of Kairav but for him.

As Suhasini is leaving with Akshara, Abhimanyu stops her and tells her that Akshara has finished his entire life just for the sake of his hand.

He says he could have lived without his hand but taking away the most important person from his life, has made him empty.

Akshara and Suhasini are shocked to hear Abhimanyu’s take on her sacrifice.

Abhimanyu also tells Suhasini that not making sacrifices was the only rule in their relationship as he had seen Manjari do it all her life and without any results.

Hearing Abhimanyu’s arguments anger Akshara and she tells him that he will not understand her sacrifice because he is not in her place.

After a while, Mahima tells Abhimanyu that she was expecting some drama from her today.

Meanwhile, Swarna tells Akshara that they understand their love and strengthens their belief in love.

Afterwards, Neil tells Abhimanyu that Akshara's sacrifice is a gesture of love for him.

Elsewhere, Aarohi disregards Akshara’s sacrifice while Suhasini scolds her for not being mature enough to understand love and sacrifice.

Meanwhile, Harshwardhan tells Abhimanyu to not take his decisions based on other people's experiences and praises Manjari and Akshara’s sacrifice.

© Copyright tellybest.com, 2020, 2021. All Rights Reserved. Unauthorized use and/or duplication of any material from tellybest.com without written permission is strictly prohibited.
Cached Saved on: Saturday 1st of October 2022 10:45:59 PMCached Disp on: Sunday 2nd of October 2022 12:18:04 PM