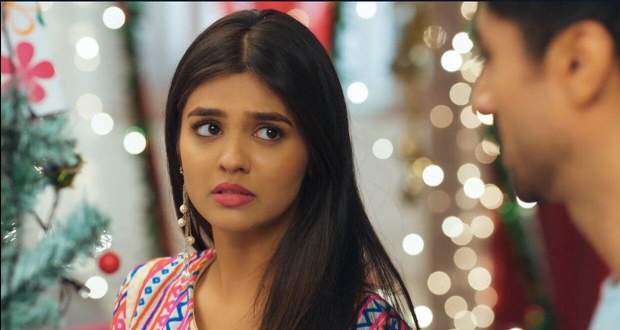 Today's Yeh Rishta Kya Kehlata Hai (YRKKH) 27 December 2021 episode starts with Arohi searching for the photo in the boxes and finally feeling relieved on finding it.
Neil discovers Arohi searching among the boxes but Arohi manages to sneak out of there along with the photo.
She was on her way to burn the photo when Akshara collides with her and the photo falls on the Christmas tree from her hand.
Arohi panics about losing the photo again and continues to search for it.
Meanwhile, the party starts with the Birlas joining in.
Abhimanyu sees Akshara entering while talking on the mic and gets spellbound.
Abhimanyu and Akshara tease glances at each other, while Arohi shudders in nervousness.
At the same time, Vansh appears as Santa and flirts with Reem while Abhimanyu reminds Harshvardhan about bringing the Goenkas to the party.
All start dancing in joy, Abhimanyu and Akshara bump into each other and get lost in each other’s eyes.
They imagine themselves dancing together romantically at the venue.
On the other hand, Harshvardhan overhears Arohi panicking about the photo and comes to know the truth.
He frets out at first for lying but eventually orders her to calm down and look for the photo before Abhimanyu gets to see it.
The Goenkas appear at the party on Harshvardhan’s insistence who apologizes to them for the previous day’s incident.
The Goenkas join the Birlas in dance and celebrate Christmas together making Akshara relieved.

© Copyright tellybest.com, 2020, 2021. All Rights Reserved. Unauthorized use and/or duplication of any material from tellybest.com without written permission is strictly prohibited.
Cached Saved on: Thursday 20th of January 2022 02:03:44 PMCached Disp on: Friday 21st of January 2022 03:59:46 PM