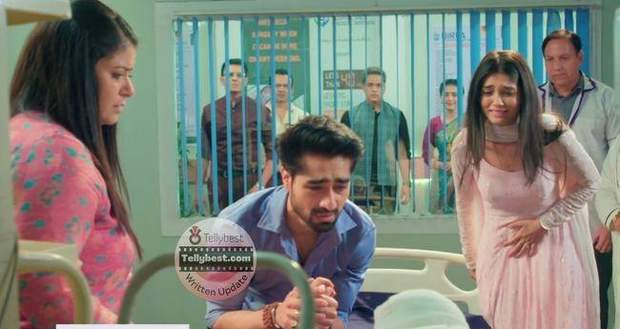 Today's Yeh Rishta Kya Kehlata Hai (YRKKH) 27th December 2022 episode starts with Akshara crying alone at the loss of Neil when Abhimanyu comes there offering the glass of water and asking Swarna to take Akshara to her room.

However, Akshara refuses to go as she wants to be with Neil and her family.

Akshara asks Swarna how things get ruined within the space of a single morning.

Later, all the family members present Neil with flowers as a sign of respect.

Anand gives Abhimanyu flowers to present on Neil’s dead body while he walks with laden feet remembering past moments with Neil.

Just then delivery for Neil arrives that Abhimanyu has sent for him from Jaipur.

After a while, Akshara comes forward to offer her respect but Manjari jerks off her hand and tells Akshara that she will not let Neil’s killer come near his body.

Abhimanyu remains silent while Akshara requests Manjari to let her say her goodbyes.

Aarohi also tells Akshara to go away as she has not only taken her mother but her husband from her.

Despite Swarna’s request to let Akshara pay her respect, Manjari pushes Akshara away and tells her that she has destroyed everything in their family and it is all because of her.

Later, seeing Manjari’s condition, Anand and Mahima ask Akshara to go into her room and not cause more grief to Manjari and Aarohi.

Seeing Abhimanyu silent and Manjari and Aarohi looking at her accusingly, Akshara returns to her room.

Akshara apologises to Neil for causing his death and tells him that she loves him a lot.

After Neil’s departure, Manjiri is out of control while Mahima tries to inject her with a sleeping dose.

Hearing Manjiri shout, Akshara comes down to comfort her but Manjari gets more violent seeing her and tells her to get out of her sight.

Akshara is shocked at Manjari’s behaviour while everyone tells her to go to her room.

After a while, Abhimanyu tells Manjari to calm down for his sake but Manjari tells him that she is not able to console herself of Neil’s loss.

Looking at Aarohi, Manjari recalls how Aarohi claims that Akshara has taken her mother away and all her happiness but until today she did not realise that it was all true.

Manjari blames Akshara for going to the concert and taking Neil with her.

She also tells Abhimanyu that had Akshara stayed home her son Neil and his babies would have been alive as well.

Abhimanyu remains silent but his eyes seem to agree with Manjari.

Mahima also agrees with Manjari and blames Akshara for the whole scenario saying she should have waited for the police instead of getting involved with the goons.

Shefali tries to speak in Akshara’s favour reminding them that she has also lost her babies but Mahima tells her that it was all Akshara's fault that this family is suffering.