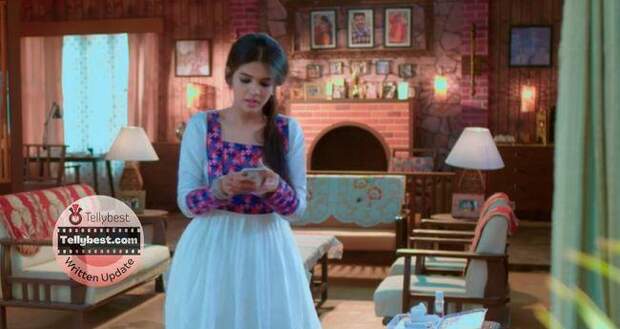 Abhinav looks shocked and before he can ask something, Abhimanyu turns Abhinav towards Akshara who is standing behind him.

Akshara is shocked to see them drunk and balances Abhinav on her arm, leaving Abhimanyu alone and asking someone to help Abhimanyu.

However, Abhinav hugs his friend Sattu Bhai introducing him to Abhimanyu.

Seeing Abhinav's drunken state, Sattu Bhai takes Abhinav inside telling Akshara that he will come back for Abhimanyu.

She also tells Abhimanyu to not get informal with her and address her as “Aap” as she cannot risk her past getting mixed with the present.

She folds her hands in agitation and tells him to stay away from her husband and son and maintain the distance from her that he has created many years ago.

The next morning, Abhinav is having a hangover and prays to God that Akshara forgives him easily and allows him time to say goodbye to Abhimanyu.

Just then, Akshara comes with a car and scares Abhimanyu into sitting in the car without saying bye to Abhimanyu.

Abhinav has a headache but apologizes to Akshara for his mistake and tells her to scold him all she likes but not sulk.

Akshara bursts into anger telling Abhinav that he has behaved irresponsibly and did not even bother to tell her where he is.

She tells him that if he wants to spend his life drinking away with his Sir Ji, then he is most welcome.

She prepares a hangover drink for Abhinav and tells him to go to work after drinking it.

Meanwhile, Nishtha is telling her friend that she cannot join her today as she is babysitting her niece and cannot leave her alone.

However, Ruhi tells her to go and that she will be a good girl.

Nishtha hesitates for a while but agrees to go for fifteen minutes.

Elsewhere, Akshara gets shocked to see Abhinav injured on opening the door as he got hit by a truck upon crossing the road.

Akshara’s neighbour tells her that there is no nurse or doctor available in the hospital due to the strike.

Akshara requests him to call the doctor home while giving first aid to Abhinav.

In the meantime, Ruhi is reading in the room when power is cut and scares her.

Nishtha has locked the room from the outside and Ruhi feels stuck and scared.

Later, Akshara is shocked to see blood seeping out of Abhinav’s head while Abhinav begins to shiver.

Just then Akshara’s neighbour calls her to tell her that she is going down to bring the doctor as the local doctor is not available.

In the meantime, Abheer comes out of the room and is shocked to see Abhinav injured and begins to cry.

Akshara tells him to not worry and explains the situation.

He recalls Abhimanyu and tries his number.

In the meantime, Abhimanyu leaves in his car promising to never come back even on the invitation.

Abhimanyu’s phone is on silent and he is working on his laptop and does not see the phone ringing.

Abheer is messaging Abhimanyu when Abhinav’s condition worsens and he drops the phone to rush to him.

Meanwhile, house help Babloo comes to Ruhi's door and tells her to not worry and use the emergency light in the almirah by the time he opens the stuck door.

Ruhi goes inside, scared, and hides inside the almirah instead of taking out the light.

In the meantime, Abheer asks Akshara to wake Abhinav as those who sleep late do not wake up.

© Copyright tellybest.com, 2022, 2023. All Rights Reserved. Unauthorized use and/or duplication of any material from tellybest.com without written permission is strictly prohibited.
Cached Saved on: Friday 27th of January 2023 11:59:03 PMCached Disp on: Thursday 2nd of February 2023 09:17:47 PM