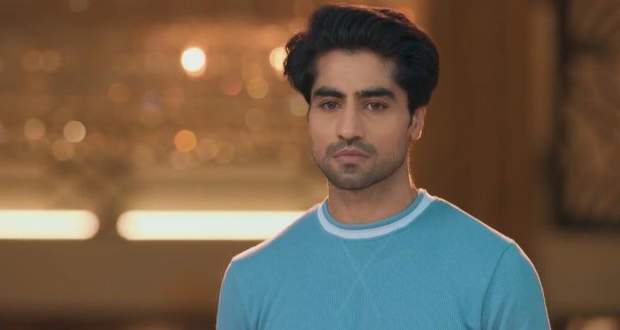 Today's Yeh Rishta Kya Kehlata Hai (YRKKH) 27th July 2022 episode starts with Abhimanyu pouring water on Tawa in the kitchen and telling her that if she wants to be a sacrificial goddess then he will become one too.

Akshara stops Abhimanyu that she is not sacrificing anything but has prioritised her life like a sensible person.

She tells him that she has only kept her dreams on the backburner but has not forgotten about them or ignored them. She is just concentrating on his hands for now because her audition can wait but his hand needs to be fixed now.

She promises him that she will not ignore taking care of her voice and will use this time to polish her musical skills.

Abhimanyu doesn’t look convinced but his anger has subsided and he hugs Akshara thinking of something.

Meanwhile, Suhasini tells Manish to organise a veneration for the peace of the house while Swarna asks Kairav about his marriage plans with Alisha.

Meanwhile, Manjari asks Anand about finding a doctor who is known as Dr Miracle because he use to take cases that no one else does.

Anand tells them that he has not talked to him because he has stopped doing surgeries.

Abhimanyu feels disappointed while Akshara stands firm and tells Anand that whatever big reasons he might have for stopping his surgery, he might start doing this because of Abhimanyu.

Anand looks doubtful and tells Akshara that for a surgeon reason has to be bigger than the reason for leaving his surgery.

Later, Akshara tells Abhimanyu that Harshavardhan has invited a very accomplished doctor home to talk and find solutions for him.

At night, Abhimanyu quizzes the doctor about his condition while he tells him that his chances of living with a damaged hand permanently in more than 95 per cent.

Abhimanyu has lost hope and goes to his room dejected.

Akshara watches Abhimanyu being frustrated and angry at himself and comes down. Afterwards, Akshara thinks about Dr Miracle and decides to find him and convince him to perform the miracle for Abhimanyu.

Elsewhere, Kairav is trying to reach Alisha whose phone is constantly off and he wonders whether she wants to be in a relationship with him or not.

Meanwhile, Akshara is laying wide awake thinking about today’s events and searches for the Dr miracle on the internet.

Akshara resolves to find him by hook or by crook.

© Copyright tellybest.com, 2020, 2021. All Rights Reserved. Unauthorized use and/or duplication of any material from tellybest.com without written permission is strictly prohibited.
Cached Saved on: Sunday 2nd of October 2022 07:01:54 AMCached Disp on: Thursday 6th of October 2022 03:54:28 PM