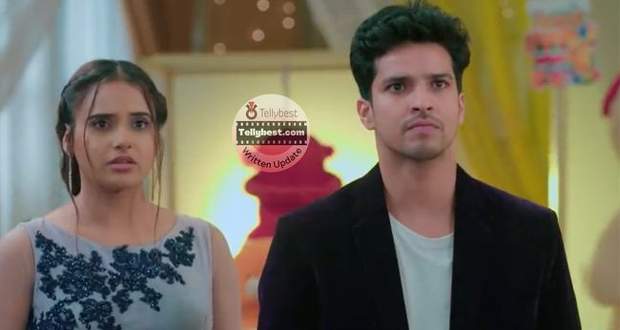 Today's Yeh Rishta Kya Kehlata Hai (YRKKH) 27th November 2022 episode starts with the Police telling the Birlas that they have come to arrest Abhimanyu Birla for charges of domestic violence.

Manish and Harshvardhan argue with a Police officer for arresting Abhimanyu.

Akshara tells Aarohi that she is misusing the law to get her way.

She also tells Aarohi to take back her complaint just now else she will regret it for her life as she will make her life at home and hospital so difficult that she will not be able to breathe properly.

As the police are about to take Abhimanyu, Aarohi stops them and takes back the complaint saying that there has been a misunderstanding.

Afterwards, Aarohi apologises to everyone for causing the problem and tells them that they should let go of the matter.

However, Neil is not ready to let go of the matter and tells Abhimanyu that he cannot let the matter pass as Abhimanyu has mistreated Aarohi and is not even ready to apologise sincerely.

He warns them that if in future anyone dares to insult or misbehave with Aarohi then he will leave this house and will never come back.

Telling Neil that he has been heard, Abhimanyu looks sadly at Shivansh for spoiling his birthday and goes away.

Abhimanyu comes back to his room thinking about Neil's harsh words and tears up the beanbag in his room.

Akshara tells him to calm down and not worry about it.

However, Abhimanyu tells her that he cannot fathom Neil thinking badly about him.

In the meantime, Shefali comes to Manjari to comfort her while Manjari expresses her fear about Neil and Abhimanyu growing apart and fighting so barbarically with each other.

Meanwhile, Mahima fuels Manjari’s fear by pointing out to her that Abhimanyu and Neil are not real brothers and neither is Aarohi and Akshara real sisters.

That is why they have so many differences between them and causing problems in their family as well.

Seeing the iron hot (ready to break), Mahima suggests to Manjari to separate Neil or Abhimanyu from the house so that they all can live peacefully.

Manjari gets scared and tells Mahima that she will never allow this to happen between her children and will do everything to keep them together.

In the meantime, Akshara tells Abhimanyu that it was all Aarohi’s doing and Neil is not behaving himself.

Meanwhile, Manish is disappointed in Aarohi for causing the debacle at Shivansh's birthday.

Seeing Vansh and Swarna side with Aarohi, Manish gets angry and tells them that Aarohi has been acting foolish and might destroy Akshara’s life along with hers.

Later, Aarohi comes looking for her phone and finds it with Akshara.

Meanwhile, Akshara tells her about reading her messages to Neha about calling the police.

She also warns her that she will not let Abhimanyu and Neil’s relationship break apart.

However, Aarohi resolves to find out Abhimanyu’s secret and destroy everything that is keeping everyone together.

© Copyright tellybest.com, 2022, 2023. All Rights Reserved. Unauthorized use and/or duplication of any material from tellybest.com without written permission is strictly prohibited.
Cached Saved on: Sunday 27th of November 2022 11:56:51 PMCached Disp on: Tuesday 6th of December 2022 02:10:09 PM