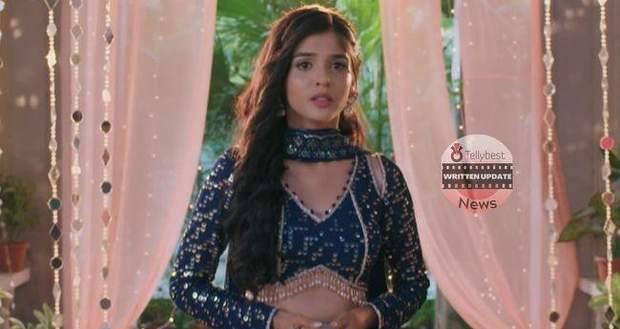 Today's Yeh Rishta Kya Kehlata Hai (YRKKH) 27th October 2022 episode starts with Akshara watching Abhimanyu from the door and a tear rolling down from her eyes.

Just then Abhimanyu sees her and Akshara wipes her eyes and enters the room apologising in mind to him for not knowing that he is taking sleeping pills.

Abhimanyu looks complainingly at Akshara for taking away his sleep.

Akshara walks in and sits beside Abhimanyu and they continue to communicate in silence.

Just then, Shivansh’s cries grow louder and Akshara asks Abhimanyu to give her Shivansh so she can comfort him.

After a while, Akshara's melodious voice acts as a lullaby and soon Shivansh is asleep.

Meanwhile, Mahima tells everyone to get done with the Bangle ceremony else something inauspicious will happen again.

Neil asks for Abhimanyu and Akshara while Manjari prays for ABhiRa to be together and talk to each other.

After a while, Manjari watches Abhimanyu sleeping in Akshara’s head and thinks about how important Akshara is to him.

Later, Aarohi comes to call ABhiRa and seeing them sitting cosily becomes envious and tells them to come down for her ceremony.

Afterwards, AbhiRa comes down and Aarohi puts her phone down.

Seeing the message pop, Akshara snoops on her mobile and reads Atul’s message to her and wonders about the papers.

Mahima tells Anand about the tomorrow's Kairav case hearing and decides to take their smile away.

She addresses everyone and tells them that after three days there is a very good Mahurat for Neil and Aarohi's wedding.

After a while, Kairav messages Abhimanyu to meet him outside and gives him some of Akshara’s personal stuff telling him to think about his and Akshara’s relationship.

Later, the Goenka come back home to see Manish reading something and tries to talk to him but he remains quiet.

Manish tells Swarna that he wants to cook something for everyone as tomorrow is Kairav’s case hearing.

Swarna becomes upset for not being there for Manish at this time while Akshara comforts her and tells her not to give up until there is time.

Meanwhile, Abhimanyu is sitting alone and looking inside the box where Akshara’s one year of memories are stored along with a tape recorder where she has addressed him about missing and loving him alone.

Elsewhere, Akshara tries to call Dr Kunal or Maya so that she can ask him for Proof of Kairav’s innocence.

On Aarohi’s request, Neil talks to Mahima about taking back the case for Aarohi’s sake.

Still, Mahima gets outrageous and tells him that she wants justice for Anisha and will never take the case back.

© Copyright tellybest.com, 2022, 2023. All Rights Reserved. Unauthorized use and/or duplication of any material from tellybest.com without written permission is strictly prohibited.
Cached Saved on: Monday 21st of November 2022 08:45:22 AMCached Disp on: Thursday 1st of December 2022 12:19:31 PM