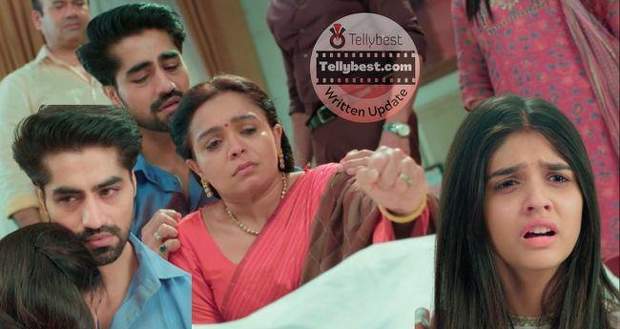 Mahima, Shefali and Anand take Manjari to her room while Nishtha takes Aarohi to her room.

Afterwards, Shefali tells Abhimanyu to go to Akshara who is not well and needs his care and understanding.

Abhimanyu stands up with a determined look, remembering the past moments when he lost his children and Neil.

In his room, Abhimanyu hears Neil’s voice on a smart speaker and throws it away saying Neil will never come back.

Akshara comes to him to seek comfort from him but Abhimanyu rejects her touch and tells her that it is because of her that he has lost his brother and his children.

Akshara is shocked to hear Abhimanyu’s accusations while Abhimanyu tells her that she has destroyed everything by not keeping her promise.

Akshara tries to tell him about her condition but Abhimanyu tells her that he knows about her cramps but why did she not return home after her check-up?

He asks her if she had gone mad to get tangled with the goons on their own and if there was no other way to help those girls except to risk his children and brother's life.

He reminds Akshara how she has always been stubborn and does as she likes without listening to anyone.

Abhimanyu tells her that it is her habit that she has always done what she likes and never listen to anyone due to her stubbornness.

Akshara tries to justify her actions but Abhimanyu tells her to not justify her mistakes and is still being stubborn again.

He throws things in the room continuously asking Akshara why does she not listen to him.

Akshara tells him to not do that as her mental health is fragile and cannot tolerate this noise.

Abhimanyu tells Akshara that this is not the first time she is accused of being responsible for anyone’s death.

He cited Aarohi’s accusation about her killing her mother and feels like a failure for not being able to look after his family.

Akshara is shocked to hear Abhimanyu’s allegations and looks at him with a blank expression.

Later, Abhimanyu spots the divorce papers on the floor and tells Akshara that he was wrong to not sign the papers earlier and is paying a very high price for it.

However, he says that today he will rectify his mistake and sign the papers telling her that now they are divorced for good.

Meanwhile, Manish is consoling Harshvardhan at the loss of Neil.

Harshvardhan is feeling guilty for not being able to tell Neil that he loves him.

Swarna, Mahima and Anand all are crying and talking about Neil when Mahima accuses Akshara of being responsible for Neil’s death which alerts Manish.

In the meantime, Abhimanyu tells Akshara that her presence will continuously remind him of his mistake and that they are not meant for each other which is why they keep failing again and again despite so many chances.

At the same time, Manish asks Mahima to take Akshara home as Manjari and Aarohi are upset with her but Akshara has also lost her children and needs to be looked after.

Shefali also agrees with Manish and offers to get Akshara.

Just then Abhimanyu comes there and tells everyone that Akshara has already left the house and that they are now divorced.

Everyone is shocked to hear him while he recalls how Akshara has signed the papers and left the Mangal Sutra and ring before leaving the house in shock.

© Copyright tellybest.com, 2022, 2023. All Rights Reserved. Unauthorized use and/or duplication of any material from tellybest.com without written permission is strictly prohibited.
Cached Saved on: Wednesday 25th of January 2023 08:48:39 AMCached Disp on: Thursday 9th of February 2023 04:43:42 AM