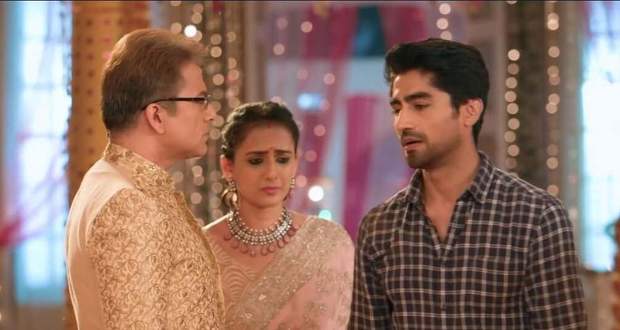 Today's Yeh Rishta Kya Kehlata Hai (YRKKH) 28 Jan episode starts with Abhimanyu agreeing to get out of the house as per Harshvardhan’s commands.

He sends his resignation letter to Harshvardhan and tells him that he will be leaving both the house and the hospital.

All the family members get shocked to hear Abhimanyu’s words.

Meanwhile, Arohi convicts Akshara to receive the same punishment as herself and asks her if she can leave Abhimanyu for this family’s reputation.

Akshara pleads with Manish to listen to her words one time, she tells everyone the truth of how both she and Abhimanyu tried to stay away from each other but failed.

After Arohi picks up an argument with Akshara again, Manish shuns both the sisters with his loud silencing command.

At the same time, Abhimanyu slowly leaves the Birla house while others try to stop him, Mahima shouts and tells him to stop in his tracks.

She explains to Abhimanyu emotionally to not leave like that as it will hurt both her and Manjari and pulls him with her towards the inside of the house.

Back to the Goenkas’, Manish asks both Akshara and Arohi to maintain peace till he makes a decision about this matter.

On the other hand, Manjari suggests Abhimanyu give Akshara some time to handle her family situation and not pressurize her.

Later, Abhimanyu thanks Neil for his support in those hard times, both brothers hug each other in joy.

On the other side, Akshara looks through the family pictures and determines to convince everyone for a fresh new start.

The next day, Abhimanyu waits for Akshara to call him but Akshara gets stopped by Manish from calling Abhimanyu.

YRKKH Precap: The Goenkas and Birlas attend the same event for Makar Sankranti. Akshara and Abhimanyu to come to know about it.