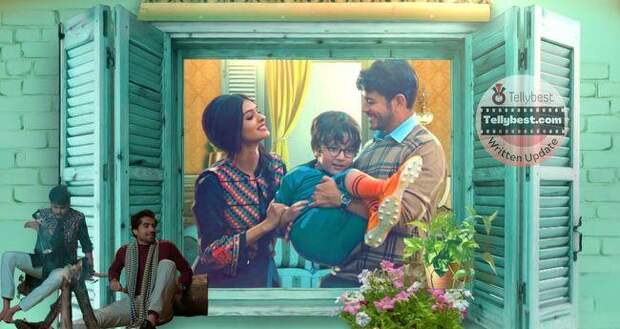 Today's Yeh Rishta Kya Kehlata Hai (YRKKH) 28th January 2023 episode starts with Akshara trying to comfort Abheer about Abhinav as nothing will happen to him as he is a super Papa.

She also tells him to be strong for his father.

Meanwhile, Ruhi is crying in the cupboard calling Abhimanyu and Aarohi.

Just then, she finds an iPod with Akshara’s voice telling her not to be afraid as she is with her.

The iPod also has Akshara's song recorded in it that soothes Ruhi.

Meanwhile, Abheer tells Abhinav that he will also pray for his health to God as he had done for him.

He goes to the home temple and asks God to send some superhero to save his superhero Papa as he knows that sometimes superheroes need help too.

Just then, Abhimanyu arrives at the house and quickly checks upon Abhinav, and asks for a nearby medical shop.

Akshara is shocked and relieved to see Abhimanyu and tells him the direction to the pharmacy but Abheer offers to take him.

Meanwhile, Nishtha is assuring Ruhi that the key maker is coming when Manjari, Swarna, and Manish are back and are worrying about Ruhi being locked in the room.

Manish pushes the door open using brute force and is thankful to find Ruhi safe in the almirah with her headphone on.

In the meantime, Abhimanyu talks to Abheer to distract him from being sad.

Abheer tells him about the time of his birth when Abhinav became his hero and saved him and he will also not let anything happen to him.

Meanwhile, Akshara is praying to God for Abhinav’s safety and tells him that Abhinav has been too kind to them without having any relationship with them and deserves to live a healthy life for that goodness.

Later, Abhimanyu returns with medicine and assures Akshara that Abhinav will be alright.

Abhimanyu gets to work while Akshara and Abheer watch him.

Later, Abhimanyu tells Akshara to take Abheer inside while he monitors Abhinav.

Afterward, he tells Abhinav that his family needs him and nothing can happen to him.

Meanwhile, Ruhi is playing with Kairav when Swarna calls her to sing Bhajan (devotional song) that Manjari has taught her.

However, Ruhi sings Akshara’s Bhajan which brings back a lot of harsh memories for Manjari while Manish and others get surprised too.

Manjari stops Ruhi and asks her sternly where she has learned the bhajan and takes her home in a bad mood.

In the meantime, Abheer asks Abhimanyu about Abhinav's unconscious state and is not ready to eat.

Abhimanyu tells Abheer to talk to Abhinav as his mind will listen to him.

Abheer gets his musical instrument and plays “Papa Kehte Hain” on it which evokes a response in Abhinav.

Abheer tells Abhinav to wake up else, Akshara will scold him for being late.

Just then, Abhinav begins to have seizures and Abhimanyu gets to work while Abheer goes to Kanha Ji to negotiate a deal to save his father.

Later, he threatens him into becoming a non-believer if anything happens to Abhinav.

© Copyright tellybest.com, 2022, 2023. All Rights Reserved. Unauthorized use and/or duplication of any material from tellybest.com without written permission is strictly prohibited.
Cached Saved on: Saturday 28th of January 2023 11:54:38 PMCached Disp on: Tuesday 31st of January 2023 06:41:11 PM