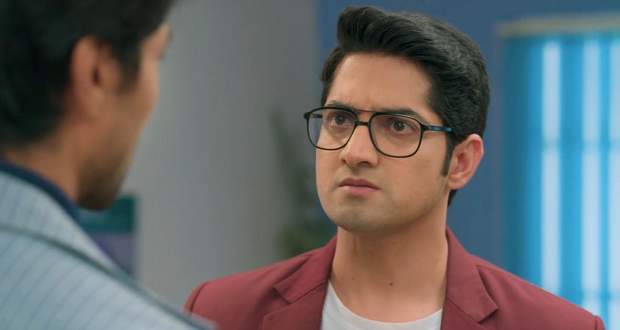 Akshara tells Suhasini she doesn’t understand where she has gone wrong.

Suhasini tells Akshara that they haven’t got the chance to get to know each other and that is why problems are arising in their relationship.

Swarna, Manish and Kairav are standing outside Suhasini’s room when Manish and Swarna tell Kairav that the decision should be Akshara’s alone.

After a while, Abhimanyu sees Dr Rohan talking to Akshara and gets jealous.

Mahima tells Harshvardhan that patients and the Board of directors are demanding the music therapy department to re-open at Birla hospital.

Anand and Harshvardhan are not happy with the decision while Mahima tells them that she has a plan.

After some time, Mahima comes to Goenka's house and asks Akshara to join them in the music therapy department.

Akshara refuses Mahima’s offer telling her that she is already working somewhere and equally committed to her work.

Mahima gives time to Akshara to think and offers flexible timings of alternate days or a few hours so that she can manage her commitments and tells her that both her family and the hospital need her.

Afterwards, Kairav badmouths Mahima calling her selfish for coming to Akshara in their time of need.

Manish scolds Kairav for giving the wrong direction to Mahima’s offer while Akshara contemplates the matter.

At the hospital, Abhimanyu is shocked to see the music therapy department's board and goes to investigate it.

Seeing Akshara in the room angers him and he grabs Akshara's hand and takes her to Anand's office.

Later, he realises that they are being pressured by the board of directors which is why they are forced to hire Akshara.

Akshara tells Abhimanyu that she has accepted the offer as she can see that she can help patients which shocks Abhimanyu.

© Copyright tellybest.com, 2020, 2021. All Rights Reserved. Unauthorized use and/or duplication of any material from tellybest.com without written permission is strictly prohibited.
Cached Saved on: Saturday 1st of October 2022 05:59:01 PM