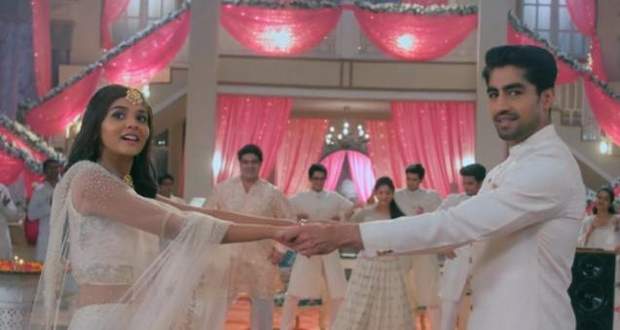 Abhimanyu talks with the detective who assures him to find the perpetrator behind Manjari’s accident.

Hearing this conversation, Arohi gets anxious and thinks of ways to save herself from Abhimanyu’s rage.

As the engagement function proceeds, Abhimanyu announces that Akshara and Anupama will perform together on Manjari’s favorite song “Piya Tose”.

Anupama questions Abhimanyu’s decision to which Abhimanyu praises Anupama’s dancing talent and her bravery in confessing her love.

As the topic of Anupama’s dance video comes into discussion, Harshvardhan checks out the video and passes sarcastic comments on Anupama’s second marriage.

However, as Harshvardhan continues to insult Anupama’s decision, Anupama breaks her silence and tells him that she has the right to choose happiness and age does not matter in love.

With Manish and others supporting Anupama, Harshvardhan gets silent and the moment of engagement arrives.

After Anupama, Akshara, and Abhimanyu’s special performance, Suhasini asks Kairav to bring the rings for the engagement rituals.

Vansh and Kairav appear with the fake rings and announce that they have lost the original ones mistakenly.

Both the families get angry at them for losing the ring while Anupama comes with the pouch after hearing the story from Vansh.

Anupama shows the rings to them and tells them that she discovered them in her bag coincidentally.

The engagement starts, Akshara puts the ring on Abhimanyu’s ring finger as both beams with happiness and love.

However, Abhimanyu shocks everyone by appearing upside-down on his time of exchanging rings and completes the ceremony by exchanging the rings.

Later, as Abhimanyu and Akshara celebrate their happiness with everyone, Anupama bids goodbye to them by wishing them the “best of luck”.