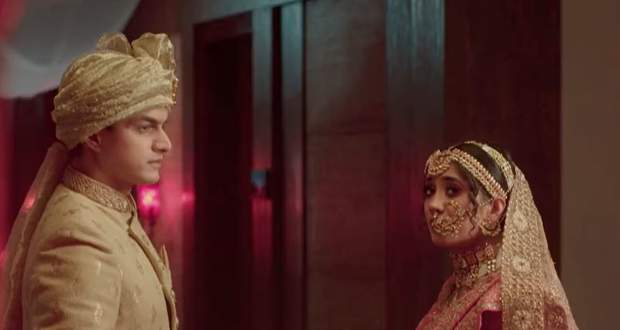 Today's Yeh Rishta Kya Kehlata Hai (YRKKH) 28 May 2021 episode starts with Kartik telling Kairav that after Sirat gets married she won't be staying with them.

Kairav answers Kartik confidently that he will stay strong during the entire function and he shall not worry about him.

At the same time, Sirat gets upset as she overhears Suvarna telling Kartik that after Sirat's marriage they won't be able to meet her as she will have her own responsibilities.

Further, Sirat expresses to Kartik her nervousness regarding her marriage as she is feeling like something important is being left behind.

Kartik assures her that after her marriage things will get simple for her as she will just have to focus on her life and boxing.

On the other hand, Narendranath gives permission to his wife and daughter to go and enjoy Ranvir's wedding.

They both go happily unaware about Narendranath's cunning ploy for getting Sirat kidnapped.

Later, Ranvir gets emotional seeing his mother and sister accompanying him for his marriage but he gets surprised knowing that his father allowed them to do so.

Further, Sirat and Kartik share an emotional moment as the wedding gets closer.

Upcoming Yeh Rishta Kya Kehlata Hai (YRKKH) episode update: Sirat takes a decision to go for her boxing match instead of getting married to Ranvir.