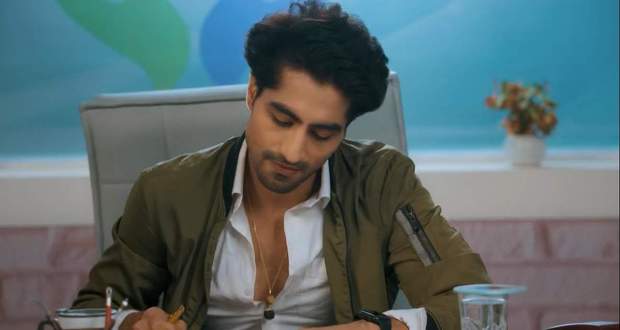 Abhimanyu recalls his attitude and tells the doctor to refer him to another hospital as he does not want to see him there.

Aarohi overhears Abhimanyu’s instructions and misunderstands Abhimanyu for being insecure and decides to take action.

Meanwhile, Harshvardhan is scolding Neil for signing papers as a Birla.

He humiliates Neil and tells him that he is only tolerating him in the house but at the hospital, he is just an employee.

Harsh says that Neil should remember that and only Abhimanyu has the signing authority after him because he is his son.

Meanwhile, Aarohi vents her anger on Vansh and tries to reach Akshara who is unavailable.

On the other hand, Neil is reliving Harshvardhan’s hurtful words when Akshara comes to comfort her.

Neil asks her not to tell this to Abhimanyu.

Akshara agrees with him and tells him that Neil is very dear to Abhimanyu, Manjari and her and he has every authority over them.

Neil is cheered and goes away smiling while Akshara recalls a report and is puzzled.

Akshara thinks of the strange behaviour that Harshavardhan has towards Neil despite his adopting him.

Just then Manjari comes in and Akshara tells her that she has once seen the adoption paper in her room and has some idea about Neil.

Manjari gets scared of the truth coming out and strictly tells Akshara that she should ask about touching anything in her room from now on.

Akshara has understood Manjari and understands that her order is because of fear and wonders what Manjari is hiding.

Abhimanyu thanks Akshara for mustard seed pillow and asks her to lie down with him.

Akshara later sees Aarohi’s calls and calls her back.

Aarohi misbehaves with Akshara about Abhimanyu which Akshara dislikes and scolds her.

Aarohi tells her about Abhimanyu’s conversation with Rudra regarding her while Akshara tells her that Abhimnayu cannot say something like this and it is Rudra who is wrong.

However, Aarohi in her anger has lost all reasons and vows to take away Abhimanyu's happiness at the first chance.

Later Akshara compares Neil's photos with Abhi's and is surprised at the resemblance.