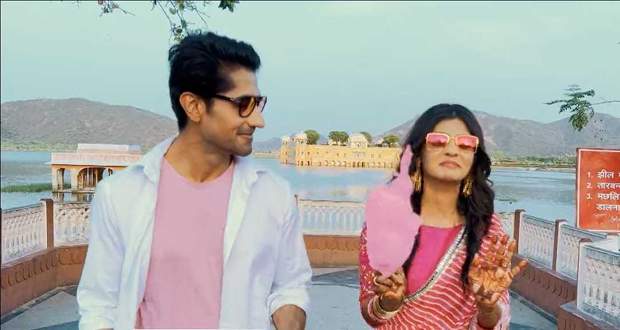 Today's Yeh Rishta Kya Kehlata Hai (YRKKH) 29th April 2022 episode starts with Abhimanyu and Akshara being engrossed in each other in the water but a slight movement brings them to the present.

Akshara spots Harshvardhan on the terrace and hides.

Afterwards, Mahima and Manjari are going to give ‘Haldi’ to Akshara to grind manually which will be applied to Abhimanyu.

Abhimanyu tries to object to the quantity but Mahima and Manjari both ask him to stay out of it as he has promised.

Dadi is surprised to see the quantity of Haldi but Mahima convinces them in the name of rituals.

Akshara also agrees to grind the ‘Haldi’. Just then Abhimanyu and his brothers come running bringing a piece of ‘Haldi’ which has fallen down.

After a while, Akshara is going to grind the ‘Haldi” when two lecherous men follow her.

Abhimanyu spots them from afar and comes to Akshara’s rescue but Akshara was gone along with the lecherous men when Abhi reaches there.

Dadi, Swarna and Aarohi are discussing Akshara’s ‘Haldi’ grinding and blame Mahima for taking revenge on them.

Akshara tells them to not take the matter to heart and requests them to arrange her clothes for ‘Haldi’ and Baraat separately.

As they leave, Akshara hears a voice behind her and turns to throw Pestle (Batta) at the intruder thinking it to be a lecherous man.

However, Abhimanyu stops her.

Despite Akshara’s insistence to go, Abhimanyu stays with Akshara and helps her while romancing her.

Abhimanyu keeps on interrupting Akshara while she tries to do her work.

Later, he again comes closer to her but Swarna's voice disturbs the moment.

Abhimanyu leaves Akshara to do her work.

Later, those lecherous men come where Akshara is.

Akshara is trying to escape them while the rest of the family remains unaware.

On the other hand, Kairav comes to Abhimanyu to have a brotherly talk with him asking him to always keep Akshara happy.

Akshara is scared and hiding to get away from those men while they are on her trail.