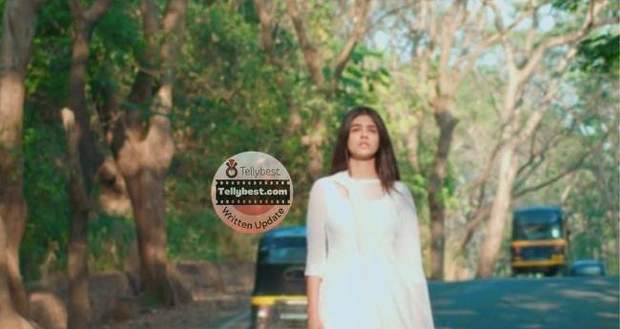 Meanwhile, Anand asks Abhimanyu what is he talking about and Abhimanyu tells him that he has told everything to them and now would like to be alone.

Manish stops Swarna from asking Abhimanyu anything as he is in one of his moods.

He also tells her that they should go home to Akshara who must be devastated.

Later, Shefali, Mahima, Anand and Parth are worried for Abhimanyu and Akshara who have taken the hasty decision.

Meanwhile, Akshara is walking in the middle of the road when moving traffic passes her by while honking at her for side.

After a while, Abhimanyu comes to Manjari’s room and is disheartened to see her condition.

Hearing Manjari blames Akshara, Abhimanyu tells her that it was not Akshara but him who let Akshara destroy everything.

Meanwhile, Manish and Swarna arrive home to not find Akshara there and get worried and call her again.

Suhasini is worried about Akshara’s mental health who must be shattered after everyone blamed her for this tragedy without realising that she is suffering as well.

After a while, Akshara sees Manish’s call on his number while he desperately prays for Ashara to pick up.

Later, Akshara sends a voice message to Manish telling him that she will not commit suicide but is going away from them like before unsure of her destination.

She also tells him that she should not have returned to their lives as she has caused mayhem in everyone's life.

Meanwhile, Akshara climbs on a bus without knowing where it is headed.

She also tells Manish that she will look after herself while life chooses her journey for her as she does not want to further make their life miserable by staying in it.

Meanwhile, the bus conductor asks Akshara where is she headed and if she has money for the ticket.

Later, the conductor is about to stop the bus to drop off Akshara when a selfless stranger helps Akshara with a ticket while she looks at him suspiciously.

The stranger seems talkative and tells Akshara that he is helping her because he is a good man and that is all he can say about it.

Later, he advises Akshara to rest her head on a window and sleep as the warm sunlight and cool air will soothe her and will give her a break from her strenuous thoughts.

Akshara takes the stranger’s advice and rests her head on the window sill while her painful thoughts circle in her head.

Later, Shefali comes knocking at Abhimanyu’s door telling him that Manjari is not well.

Meanwhile, Akshara wakes up with a start and is shocked to see herself on a bus.

The same stranger explains to her that she is in Pathankot and climbed the bus yesterday.

Akshara panics and tries to get off the bus and faints after a while.

The stranger talks in circles when the doctor asks about his relationship with Akshara.

Feeling helpless, Abhimanyu hugs Harshvardhan and calls him Papa and tells him that he has no strength left to lose anyone else in his life.

© Copyright tellybest.com, 2022, 2023. All Rights Reserved. Unauthorized use and/or duplication of any material from tellybest.com without written permission is strictly prohibited.
Cached Saved on: Wednesday 25th of January 2023 09:51:31 AMCached Disp on: Tuesday 31st of January 2023 07:26:19 PM