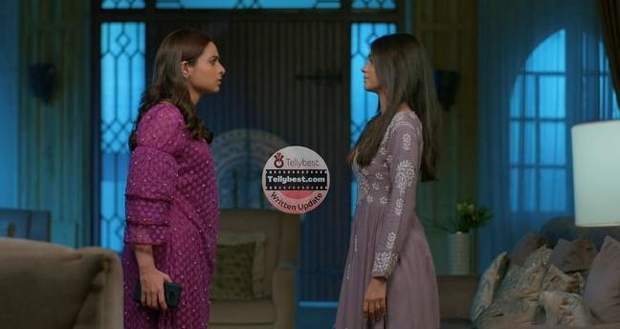 Today's Yeh Rishta Kya Kehlata Hai (YRKKH) 29th November 2022 episode starts with Arohi blackmailing Abhimanyu to adhere to her requests if he wants her to hide the truth from Akshara.

Arohi demands the title of Birla's daughter-in-law from Abhimanyu and he asks her to put light on her demands.

Later, he goes out of the room and Akshara calls his name crying.

Akshara hugs Abhimnayu tightly and informs him that she is emotional because she is going to the studio.

She changes the topic to Manjari’s Bal Gopal signalling that she is hoping to conceive a child soon.

However, Abhimanyu interrupts her and hugs her tightly while Arohi glares at them from inside the room.

Afterwards in Birla's house, Abhimanyu gathers everyone and announces Arohi and Neil’s reception.

Everyone gets shocked at Abhimanyu’s actions while Abhimanyu explains that they didn’t welcome them (Neil and Arohi) nicely after their abrupt marriage.

Arohi acts surprised and thanks Abhimanyu and mockingly asks him if there's another surprise.

In a low voice, Abhimanyu says that he will perform a special performance for them.

After some time in a secluded corner, Abhimanyu is talking to Dr Iyer but Arohi interrupts him and mocks him to take Akshu’s help for his dance performance.

Arohi walks away while Abhi sees Akshara standing behind him.

Akshara confronts Abhimanyu about his strange decision of throwing a reception party for Neil and Neil.

However, Abhimanyu lies and makes an excuse for an emergency and runs to the hospital.

In the Goenka house, everyone gets shocked to see the reception card of Arohi and Neil’s reception.

However, Manish takes Abhimnayu’s side and explains that sometimes the elders need to make decisions which benefit the family’s peace and harmony.

In the Birla house, Arohi acts like she got a sprain and screams for help and gathers everyone.

When Anand tries to check her foot Arohi refuses and looks towards Abhimanyu with dramatic eyes.

Abhimanyu touches her feet and Arohi smirks, expecting him to massage her food.

However, Abhimanyu turns around Arohi’s foot in anger portraying that he is treating her.

Arohi screams in pain while Abhimanyu glares at her.

In Akshara's room, Abhimanyu enters and Akshara confronts him about his decision regarding Arohi and Neil’s reception.

However, Abhimanyu lies that he is doing all this for Manjari’s happiness and Akshara’s doubt dies down.

Later, Abhi takes Akshara for a bike ride and Akshara wraps her arms around Abhi tightly enjoying the feel of his firm chest.

Abhimanyu explains that the bike is very special to him as he heard her voice for the first time on the bike only.

Abhi stops the bike on the side and they dance on the roadside and unleash their stress and anxiety.

He picks Akshara up and puts her on the bike and back hugs her tightly.