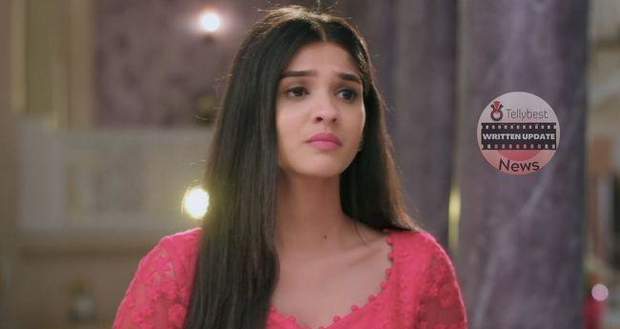 Abimanyu recalls how he came across writing on the shirt and how Parth gives him the proof telling him about Mahima’s hand in removing the proof from his room.

Abhimanyu suggests going to Goenka's house with the police and media.

At the Goenka house, Abhimanyu questions Mahima on human grounds for taking away the proof from his room and putting an innocent life at risk.

Abhimanyu is astonished to see Mahima unconcerned and asks her to apologise to the Goenkas.

Akshara tells Mahima that it is because of her that Kairav is a trauma patient and Manish had to go to jail and all their life has been ruined.

She says that though it cannot be put aside but her apology might make them feel better.

However, Mahima tells them that she is not sorry and will never apologise to them.

Mahima leaves the house without any care for anyone while Anand follows her.

After everyone leaves, Abhimanyu turns around to face Akshara while past painful moments keep playing in their mind.

Abhimanyu bends down on his knees and apologises to Manish and Kairav.

Kairav makes Abhimanyu stand and thanks him for saving his life from being destroyed and he will forever be grateful to him.

Meanwhile, Manish tells Abhimanyu that he will always remember his favour but there is no place for him in this house and in their life anymore.

Manish hands over Abhimanyu’s jacket to him and shows him the door.

In the meantime, Manjari confronts Mahima for being so reckless.

However, Mahima has no remorse for what she has done and does not accept responsibility for causing differences between Abhimanyu and Akshara.

Elsewhere, Abhimanyu is driving on his bike and anxiously waiting for Akshara’s call.

Meanwhile, Mahima once again tells everyone that only she knows the pain of losing her daughter and that she will never forgive Kairav and his family and if it is up to her then she will put Kairav in jail right this minute.

Seeing Mahima go on makes Anand angry and he shuts her up.

However, Manjari tells him that it is useless to say anything to Mahima who has never understood her own daughter and Abhimanyu and she cannot understand what her children want.

Mahima gets angry and tries to slap Manjari but Manjari stops her midway telling her that it has become important for her to take a stand and that Mahima should not think that she is weak.

© Copyright tellybest.com, 2022, 2023. All Rights Reserved. Unauthorized use and/or duplication of any material from tellybest.com without written permission is strictly prohibited.
Cached Saved on: Monday 21st of November 2022 12:56:25 PMCached Disp on: Thursday 1st of December 2022 01:32:52 PM