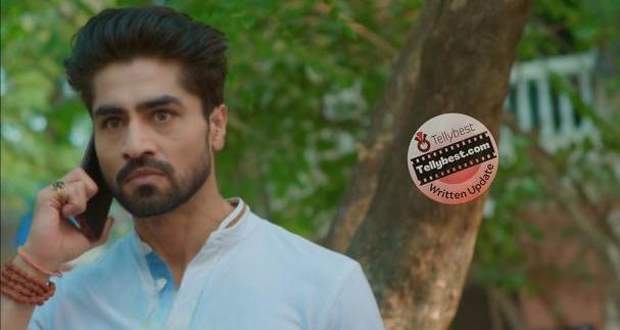 Abhi hugs Manjari and she senses his sadness through his hug and asks him what happened.

However, Abhi makes an excuse and walks away while Arohi looks at him.

At the same time, Manish and the whole Goenka family enter except Akshara.

Seeing Manish, Arohi runs towards him but he glares at her, making her halt in front of him.

Later, Manish forgives Arohi because of Abhimanyu's request and she hugs him tightly.

Meanwhile, Manjari asks them about Akshara’s whereabouts but the Goenka family looks at each other's faces disappointed.

Abhi defends Akshara when Arohi demands that she wants her sister to be present at her reception.

Afterwards, Abhimanyu beats the dhol in frustration as he has hurt Akshara.

Everyone dances to the dhol’s beat while Akshara makes a sassy entry into the house while beating a dhol.

Later, Akshara stands in front of Abhi and the time stops with everyone in the air.

Akshara begs Abhi to tell her what’s wrong with him but Abhi refuses to tell her anything.

Abhi tells Akshara that he would have told her if anything must've happened.

Adamant Akshara asks him whether Arohi is blackmailing him but he denies her accusations.

Later, Abhi takes Shivu upstairs as he was sick and Akshara follows Arohi.

In a corridor, Mahima confronts Arohi about what treasure she has that she can blackmail Abhimanyu.

However, Arohi lies but Mahima tells her not to be over-smart with her and reminds her that Arohi is in the house because of her only.

Akshara eyes Arohi’s phone and plans to steal it to get any evidence against Arohi.

He compliments Abhimanyu that he will be a great father filling Abhi’s heart with despair.

Abhimanyu's eyes fill with tears thinking of never getting a taste of fatherhood.

However, Akshara pulls out Arohi’s phone from her pouch sneakily and runs out while Manjari watches her.

In the garden, Akhara checks the incoming calls of Arohi to confirm that she was the one who called Abhimanyu earlier.

Akshara confirms her suspicion and checks the messages to find the truth.

Unfortunately, Manjari snatches the phone from Akshara’s hand and confronts her for checking Arohi’s phone sneakily.

In Shivu’s room, Arohi taunts Abhimanyu stating that he can never become a father and shows fake sympathy.

Arohi shows some legal papers and demands that Abhimanyu transfer the MD post to Neil.