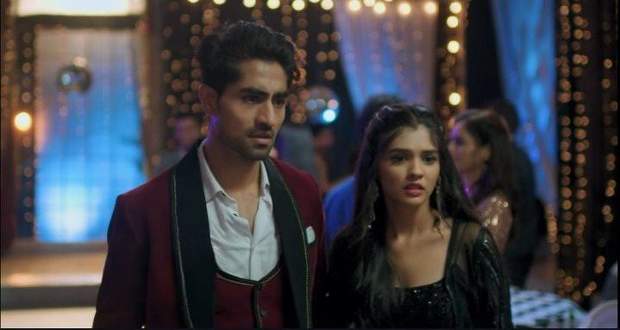 Today's Yeh Rishta Kya Kehlata Hai (YRKKH) 2nd July 2022 episode starts with Akshara finding Abhimnayu asleep and taking a selfie with him and later admiring him wondering how hot he is.

Just then she spots some other girl admiring him and gets jealous and shoos her out.

After a while, Dr Rohan comes to tell Akshara about a patient wanting to see her.

As soon as, Akshara leaves him, Abhimanyu wakes up and goes to get ready.

Meanwhile, Akshara comes to her cabin and finds Sanjay waiting for her.

Sanjay's talk creeps her out and soon he starts to harass her.

Akshara tells him to go but he makes advances on her and even grabs her hand.

Akshara tells him to leave her and go but he is a Psycho person and does not listen to her.

Just then, Abhimanyu arrives and beats the crap out of him for touching Akshara.

Abhimanyu asks the security to hand him over to the police.

Abhimanyu goes to get changed after telling Akshara that they will talk after he gets back.

On the other hand, Sanjay re-enters the hospital along with some patients hiding his face to take revenge on Abhimanyu.

Abhimanyu meets Akshara in the secluded area in the hospital and romance each other.

Sanjay steals a scalpel from the Operation theatre’s equipment and goes in search of Abhimanyu.

Just when Sanjay is about to attack, Abhimanyu realises his presence and saves himself in time.

Sanjay runs to escape Abhimanyu's wrath and hides in a room full of cylinders.

Abhimanyu realises his mad intentions and tries to pacify him so that he does not burn the whole wing but he did not listen and starts a fire.

Akshara who was following Abhimanyu despite his instructions to stay put also get caught in a fire.

Other people from the staff and Neil, Mahima, Anand and Aarohi come to help while the fire brigade takes its precious time in coming to the hospital.

After a while, Abhimanyu and Akshara rescue the trapped patients from the fire without worrying about themselves.

Later, Abhimanyu realises that Akshara went after him and feels scared for her.

© Copyright tellybest.com, 2020, 2021. All Rights Reserved. Unauthorized use and/or duplication of any material from tellybest.com without written permission is strictly prohibited.
Cached Saved on: Sunday 2nd of October 2022 05:28:08 PMCached Disp on: Thursday 6th of October 2022 03:24:31 PM