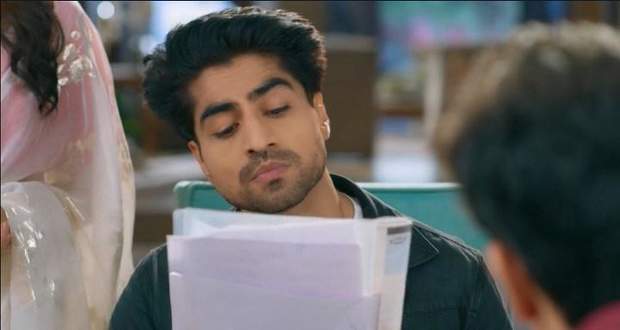 However, Harshvardhan tells him that Birla hospital has risen to great heights and is top of a line hospital that has benefited all.

Just then Abhimanyu comes in and Harshvardhan tells him that they will have to go to the hospital to check the arrangements.

The next morning, Abhimanyu is praying for the hospital but there is a feeling of dread that is persisting in his heart.

At the breakfast table, Harshvardhan is talking about the preparations and the press that will make this founder's day celebration the talk of the town.

Mahima also tells everyone that she is approached for an interview and asks Manjari if she is coming or not.

However, Abhimanyu taunts Harshvardhan that Manjari deserves to come as the land on which the Birla hospital stands is built belongs to Manjari’s father and also she is his mother and can come as his family.

Anand asks for the guest list and Abhimanyu reads them for everyone.

Manjari’s anxiety at the recollection of the past increases and she comes into the kitchen and cries.

Akshara comes to Manjari asking about her reason for stress but Manjari tells her that she does not want to go to the celebration as Harshvardhan will get upset.

At the Goenka house, Manish is discussing the time of the celebration while Aarohi bickers about not being given any credit for her work.

Meanwhile, Harshvardhan scolds Neil for not checking the list carefully.

Both Harshvardhan and Manjari look worried at Avni Rathod’s reminder while Akshara observes their tension.

After a while, Abhimanyu comes and romances Akshara in the hall while Akshara escapes him.

Akshara overhears a doctor telling the nurse about Manjari enquiring about the DNA reports and gets puzzled.

After a lot of consideration, Akshara goes to the genetic department to look at the reports but changes her mind at the last minute.

Afterwards, Aarohi finds the report on the table and takes them away.