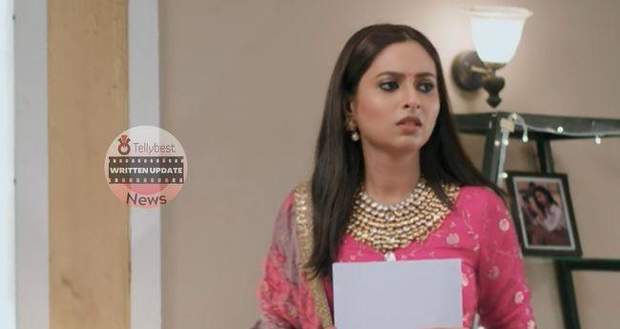 Akshara looks nervously at Abhimanyu while Manjari wards off the black eye from both of them.

Just then Manish also joins them, making everyone happy.

Abhimanyu comes to Akshara and tells her to get ready as they will soon be dancing together.

In the meantime, Kairav comes to Akshara and tells her to use every opportunity to smile and not fear anything.

Meanwhile, Suhasini tells Neil to take off his shoes for Aarti.

In the meantime, Aarohi’s friends steal Neil's shoes from him.

After a while, Neil realises that his shoes are missing and tells them that shoes are to be stolen on the wedding day.

However, Aarohi tells him that he is responsible for this change of event because at Akshara's wedding he has changed the ritual.

Later, Abhimanyu accepts the challenge that they will search for shoes but will not pay for cheating.

Meanwhile, Akshara comes out planning to search for the papers when Abhimanyu stops him in midway.

Akshara looks puzzled and asks him if he wants something to which Abhimanyu gives a cheezy reply “Tum”.

Akshara clarifies that she is asking about refreshments.

Abhimanyu gives another cheezy reply telling her that there is a fire burning inside him and he can do with something cold.

After teasing Aksahra with choices, Abhimanyu tells her that this fire is not painful but soothes him like heat in winter.

After a while, Aarohi and Neil banter with each other about finding the shoes.

Later, Aarohi goes to hide the papers more safely so that no one finds them while searching for shoes.

In the meantime, Akshara comes to Aarohi’s room to search for papers and tells Seerat's photo that she is only trying to stop Aarohi from committing a mistake.

Later, Akshara finds the papers hidden behind Seerat’s portrait and is shocked to read Aarohi’s demand for a 10 per cent share in the Birla Hospital.

Akshara decides to show it to Manish and Swarna but slips on the floor and the papers fly away and land in the flower basket.

Meanwhile, Abhimanyu holds Akshara before she falls and they look for a long time into the eyes of each other.

Later, Akshara thanks Abhimanyu and runs away while Abhimanyu looks surprised.

Aarohi also sees the paper falling into the basket and gets worried that it might be her papers.

However, the flower basket gets mixed with others when Nishtha takes it while searching for shoes.

Later, Harshvardhan comes to Manish with a glass of juice and warns him that he will take the revenge of the previous Sangeet from him so he better be prepared for it.

After a while, Akshara finds the basket but it also has no papers in it.

© Copyright tellybest.com, 2022, 2023. All Rights Reserved. Unauthorized use and/or duplication of any material from tellybest.com without written permission is strictly prohibited.
Cached Saved on: Monday 21st of November 2022 09:44:38 AMCached Disp on: Wednesday 7th of December 2022 11:49:23 AM