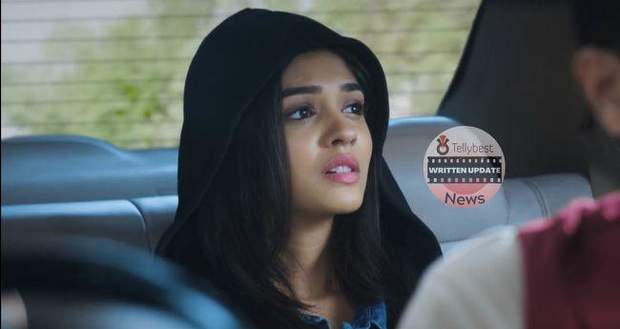 In the meantime, Dr Kunal tells Akshara about Maya finding fans who want her to sing.

He asks Akshara to sing a few lines so that they can get rid of the fans.

In the meantime, Abhimanyu is in the temple thanking God for Shivansh.

Later, Akshara sings the song but by that time Abhimanyu has gone.

After a while, Akshara realises that her bracelet is missing a piece while Abhimanyu finds it on Shivansh and recalls Akshara.

After reaching the hotel, Akshara calls Kairav to give him an update and share the nostalgia that is attacking her from all sides while being in Jaipur.

She also shares her helplessness at not being able to tell Abhimanyu anything about Maaya and the contract.

Kairav encourages her to go see Abhimanyu as it will motivate her to win the competition.

On the other hand, Abhimanyu is talking to Shivansh about the musical note he found on him that reminds him of Akshara.

Just then Shefali comes asking him to prepone her boss's surgery as they will have to cover the Mauritius Gala Finale in the evening.

Sometimes later, Akshara arrives at the Birla house in hopes of seeing Abhimanyu.

Akshara is getting the feel of the house when Manjari's car stops at the gate.

Akshara sees Manjari with longing eyes and overhears the conversation that tells her that Abhimanyu is not in Udaipur.

Feeling disappointed, Akshara complains to God for making it impossible for her to meet Abhimanyu.

Meanwhile, Mahima is obsessed with finding Kairav and vows that that day will come soon.

Later, Kairav gets a message from Akshara about visiting her home but not finding Abhimanyu there.

Kairav feels panicked and tries to calm himself and try to be brave so that Akshara does not worry about him.

Meanwhile, Abhimanyu is meeting with Shefali’s boss who is a jolly good person and invites him to attend the Mauritius Gala Award.

Abhimanyu tries to dodge the invitation but has to give in considering Shefali’s professional reputation.