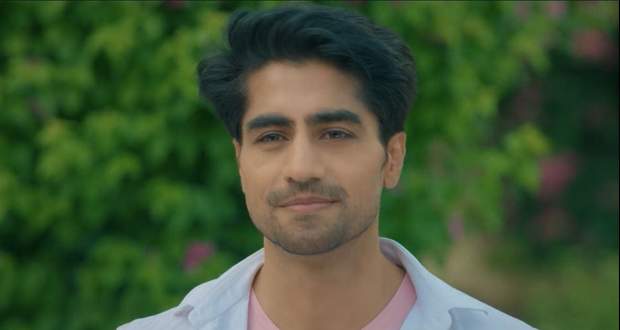 Just then Akshara meets him on the way and dances around him.

Akshara tells him excitedly that it is their wedding day while Abhimanyu carries her in his arms and dances.

However, it was just a dream.

Later, Abhimanyu arrives in Akshara’s room to find it empty.

Just then, Aarohi comes in and is surprised to find Akshara missing from her room.

Abhimanyu gets worried and searches for her everywhere.

Meanwhile, both the families have gathered together in the hall to perform the ritual of ‘Haldi’ together.

Manjari praises Swarna for the fineness of the ‘Haldi’.

In the meantime, Birlas and Goenkas are arguing over having Haldi separately or together.

Mahima’s taunts force Goenkas to answer back which gives Mahima the opportunity to cancel the function.

Manjari tries to pacify Mahima, who ultimately decides to have the ‘Haldi’ ceremony separately.

Meanwhile, Abhimanyu finds the room of those evil men and beats them to know Akshara’s whereabouts.

Akshara who was locked in a room breaks the glass to get Abhimnayu’s attention.

Abimanyu is relieved to find Akshara and hugs her and asks her about the men.

Akshara tells them that in trying to escape those men, she got stuck in a room and couldn’t get out.

Abhimanyu is determined to take revenge on those men, but Kairav and Vansh tell him that they can take care of them.

Mahima is pleased to see the arrangements and is happy to get rid of the Goenkas for a few hours.

On the other hand, Abhimanyu is waiting outside for Akshara and is mesmerised to see Akshara dressed beautifully and adorned with flowers while Akshara smiles with love gazing into Abhimanyu’s eyes.