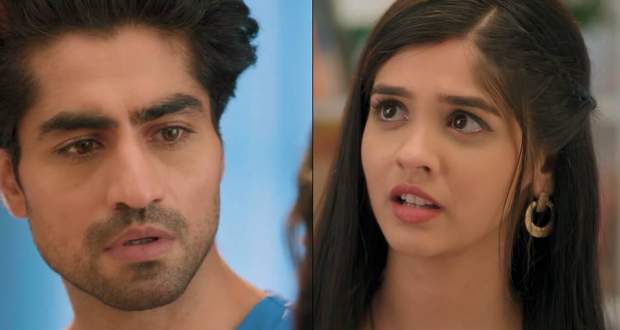 Later, Parth talks about going to Mr Bijoria’s party and asks Abhimanyu and Akshara to come as well.

However, Abhimanyu gets called away before he could answer.

Meanwhile, Harshvardhan receives a message that Mahima wants Parth to take Harshvardhan’s position in the hospital but Harshvardhan decides that he will not let this happen.

In the meantime, Akshara has some paperwork and is confused to go or not go to the party.

After a while, Parth, Shefali and Neil insist on Abhimanyu to get ready to go to the party.

Akshara gets a message from Suhasini telling her that staying quiet during a fight kills a relationship.

After a while, Manjari is preparing Abhimnayu’s clothes and tells him to fight as much as he like but don’t stay quiet.

Afterwards, Abhimanyu arrives at the party and looks for Akshara.

Mr Bijoria meets Abhimanyu and asks for Akshara while Neil tells him that she will be along soon.

Later, Manjari arrives at the hospital and relieves Akshara from her duty and tells her to go get ready for the party.

Meanwhile, Abhimanyu is waiting for Akshara and vents his frustration on the bartender.

Just then, Dr Rohan meets Abhimanyu in a drunken state and asks Abhimanyu to patch things up with Akshara because that pains doctors, nurses and staff too as they consider them their family and inspiration and they do not want to see them apart.

After a while, Akshara drives away to the party while Abhimanyu eagerly waits for Akshara.

After seeing Aarohi arrive alone, Abhimanyu gets angry and tries to leave the party when Neil stops him.

Both get into a fight and Neil Climbs over Abhimanyu to stop him from going away.

Later, Abhimanyu tries to shrug Neil who falls to the floor.

Abhimanyu apologises to Neil and they let go of their fight.

Neil advises Abhimanyu to patch things up with Akshara also in the same way and all his problems will vanish.

© Copyright tellybest.com, 2022, 2023. All Rights Reserved. Unauthorized use and/or duplication of any material from tellybest.com without written permission is strictly prohibited.
Cached Saved on: Tuesday 22nd of November 2022 03:16:09 AMCached Disp on: Thursday 1st of December 2022 09:29:11 PM