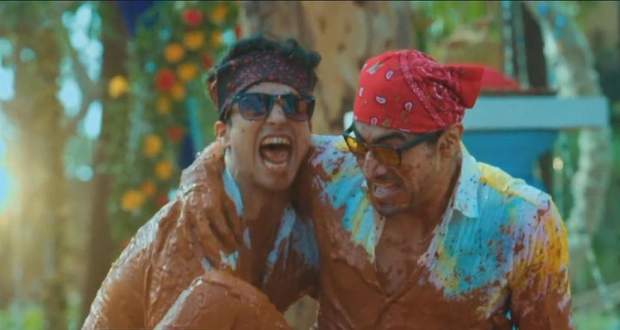 As she was returning, she hears the song on the speaker and sees Abhimanyu standing right in front of her, with the bike.

On the other hand, Aarohi reaches home while following Abhimanyu.

Meanwhile, Abhimanyu tells Akshara that he plans to play Holi with his fiance.

Seeing Abhimanyu undress puzzles Akshara and she questions his motive.

Abhimanyu explains that he is merely getting rid of the mudstain cloth so that he can play Holi with her.

Between the game of cat and mouse, Abhimanyu applies colour to Akshara.

Afterwards, Abhimanyu convinces Akshara to go with him to the Birla house to celebrate Holi.

Before leaving, Akshara pics the bottle of Thandai that was delivered a while before.

Seeing Akshara with the bottle of ‘Thandai’ Aarohi gets worried and again follows them in her car.

When Akshara reaches the Birla house she is in an intoxicated state whereas Harshwardhan has also had a drink mixed with’Bhang’.

Aarohi also comes inside while Akshara tells her that she will not tell anyone about the accident.

After a while, Abhimanyu accuses Aarohi of following him while Aarohi denies the allegation while explaining the nature of the call, Aarohi asks him to check with the hospital.