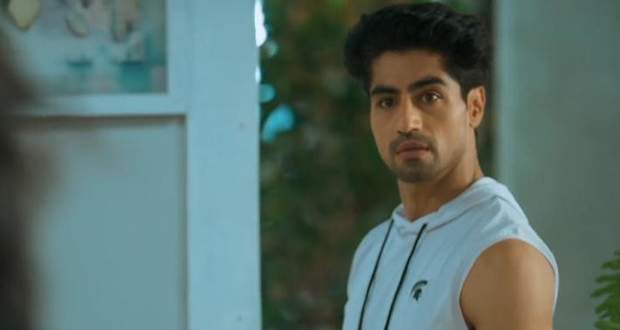 Today's Yeh Rishta Kya Kehlata Hai (YRKKH) 30th May 2022 episode Manjari telling Akshara to not work in the kitchen as she has to go to work.

Akshara tells her that same goes for her and if Manjari will work then so will she.

Just then Abhimanyu comes and signals Akshara to come but Akshara signals him that she is working.

Abhimanyu gets disappointed and goes away.

Later, Akshara comes into the room and gives Abhimanyu a drink.

After some bantering Abhimanyu is about to get romantic when Neil comes in with a message for breakfast.

Meanwhile, Manjari is destroying the adoption papers when Harshvardhan finds her and in her fear, she overlooks a fallen paper and asks the staff to burn papers.

After a while, Akshara is calling Abhimanyu to hurry when Mahima and Harshvardhan taunt Akshara.

Akshara asks them to not demotivate her on her first day.

Akshara in her hurry drops her papers and picks up the adoption paper along with it.

Later, Akshara arrives at the hospital and is shocked to see patients being referred to the private clinic.

Akshara calls Abhimanyu and asks to check the patient himself after explaining the whole matter.

As Akshara opens her file, she gets surprised to see an adoption paper in her file.

Meanwhile, Abhimanyu comes in and questions the authority which makes Akshara look bad.

Just then the team comes in and denies all allegations while Abhimanyu warns them.

Akshara stops Abhimanyu and tells him that there are other ways to deal with such matters.

However, Abhimanyu gets angry and leaves.

Akshara goes back to her work.

After returning from the hospital, Akshara is thinking of talking with Abhimanyu but Harshvardhan stops her and scolds her for calling Abhimanyu to her hospital.

Akshara tries to explain herself but Harshvardhan keeps on rebuking her and warns her to be careful of Abhimanyu’s reputation.

Afterwards, Harshvardhan informs Manjari about someone coming to pick up DNA samples the next day which shocks Manjari and she drops the tray of water making Harshvardhan angry.

Later, Manjari asks Abhimanyu about the need for a DNA test and Abhimanyu's explanation of the usefulness of the test to know the real parents further worries Manjari.

© Copyright tellybest.com, 2020, 2021. All Rights Reserved. Unauthorized use and/or duplication of any material from tellybest.com without written permission is strictly prohibited.
Cached Saved on: Thursday 30th of June 2022 12:28:21 AMCached Disp on: Saturday 2nd of July 2022 08:48:50 PM