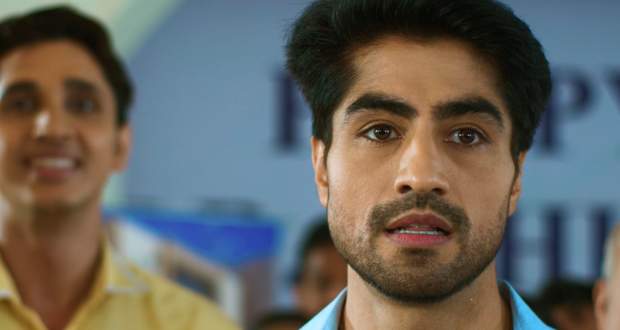 Today's Yeh Rishta Kya Kehlata Hai (YRKKH) 30 November 2021 episode starts with Abhi's staff taking him to his surprise birthday party where Akshara is hiding behind a wall and is hoping to bring a smile to Abhi's face.

At the same time, Neil praises Abhi on stage and asks Abhi to come and say something.

Harsh appreciates the efforts of Neil and Manjiri for the party and also warns of bad consequences if Harsh gets hold of Akshara.

Meanwhile, Neil presents a surprise dance for Abhi in which Akshu (disguised as an angel) and a few children perform for him.

While dancing, Akshu brushes against Abhi. Even though Abhi senses Akshara but he could not recognize her.

Later, Abhi imagines one of the dancers as Akshu and dances with her but the dancer turns out to be one of the nurses.

Akshu falls while dancing but before Abhi could hold her, Akshara manages to escape the party. Neil joins Akshara thanking her for performing as an angel and Akshara thanks God for bringing a smile to Abhi’s face.

Further, Manjiri who was motivated by Akshara surprises Abhi and other members of the party by singing a song that makes Abhi very happy who lifts Manjiri in happiness.

Concurrently, Ruby standing there intends to celebrate one day like today with Abhi.

However, Abhi doubts Neil and asks Neil with whose help he has executed the party but Neil evades the question.

Furthermore, Manjiri asks Abhi to find happiness (where Abhi has flashbacks with Akshara). Abhi cuts the cake and gives it to everyone except his father, Harsh.

Later, Abhi dances with Manjiri, and Aarohi stares at him. Aarohi comes with a white rose to give to Abhi and keeps the red one back but Abhi rushes towards the voice of Akshu who shouts in happiness.

But Neil tries to save Akshu by stopping Abhi in the midway.

© Copyright tellybest.com, 2020, 2021. All Rights Reserved. Unauthorized use and/or duplication of any material from tellybest.com without written permission is strictly prohibited.
Cached Saved on: Wednesday 19th of January 2022 01:04:47 PM