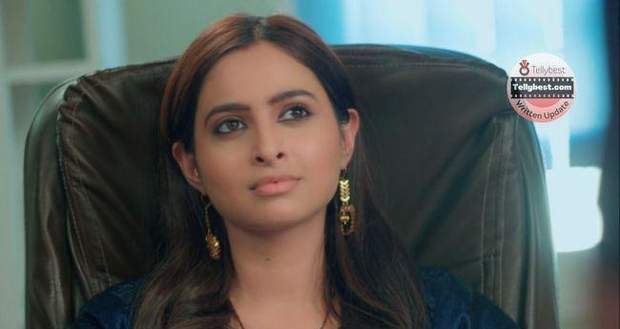 Today's Yeh Rishta Kya Kehlata Hai (YRKKH) 30th November 2022 episode starts with Akshara getting off the bike and Abhi teases her but Arohi interrupts their moment.

Arohi awkwardly greets Akshara and Abhi and demands to know what they are gifting her and Neil at their reception.

Abhimanyu asks what she wants while Akshara taunts her, reminding her that Abhimanyu is sponsoring the whole reception.

She argues with Akshara and Abhi starts to give the bike keys to Arohi but Akshara snatches the keys from his hands.

Akshara walks away after announcing that she will not give Abhi’s bike to her as Abhi’s bike is his life.

Arohi mocks Abhimnayu saying that Akshara has the bike’s keys but she has the truth keys so he better brings the bike keys.

Abhimanyu retorts that he wishes Arohi had the key to her brain.

Arohi gets angry and blackmails Abhi more saying she will file the case for domestic violence herself this time.

In Akshara’s room, Akshara is roaming the room in anxiety when Abhimanyu enters.

Seeing Abhimanyu, Akshara rants about the importance of the bike but Abhimnayu takes the keys from her hands.

Akshara cries and asks him why he is valuing Arohi’s words so much and runs out of the room.

In the corridor, Akshara decides to find out the truth about Abhimanyu’s weird behaviour.

Meanwhile, Abhimanyu is reminiscing about the moments spent on the heavy hearty bike and removes the key ring from the keys.

Later, he gives the keys to Arohi and she puts a big key ring stating her name on the bike keys.

In Arohi’s room, Arohi lies to Neil about the bike keys and explains that she wanted to confirm whether Abhimnayu’s intention in arranging the reception is genuine or not.

Arohi demands to go on a bike ride and Neil agrees but exclaims that they will return the keys to Abhimanyu.

On the other hand, Abhimanyu is searching for Akshara worriedly and suddenly Neil calls him.

Abhimanyu goes out and sees his bike missing while Arohi blames Akshara for stealing the bike.

On the road, Akshara is driving the bike furiously while cursing Arohi for taking Abhi’s bike which he loves.

Suddenly a car stops in front of her and Abhimanyu asks her to come back.

However, Akshara does not listen to him and demands to know what is he hiding from her.

Akshara sits on the road stubbornly and asks him what is stressing him.

Abhimanyu lies to Akshara and asks her to drive the car home while he drives the bike.

Akshar sits furiously and ignores him while driving the car.

During the whole ride, Abhimanyu looks toward the car from time to time but Akshara gets a message and changes her route.

Abhimanyu reaches home and waits for Akshara wondering where Akshara is as she was just behind him.

At the entrance of the Goenka house, Akshara comes out of the car while Abhimanyu calls her.

Akshara picks up the call informing him that she is standing in front of her other house.

© Copyright tellybest.com, 2022, 2023. All Rights Reserved. Unauthorized use and/or duplication of any material from tellybest.com without written permission is strictly prohibited.
Cached Saved on: Wednesday 25th of January 2023 10:00:55 AMCached Disp on: Wednesday 1st of February 2023 09:15:49 PM