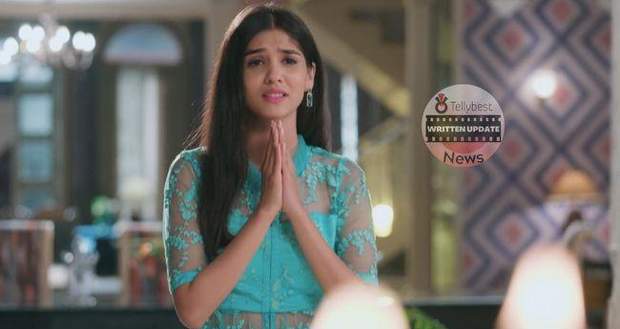 Today's Yeh Rishta Kya Kehlata Hai (YRKKH) 30th October 2022 episode starts with Suhasini and the Goenka family thanking God in the temple for saving Kairav and Manish and bringing back their dignity and reputation on the pious day of Dhanteras.

Kairav embraces Akshara, thanking her for believing in him in the time when he couldn’t trust himself.

Meanwhile, at the Birla mansion, Abhimanyu arrives there and coldly states to Mahima that he feels sorry that he won’t be calling her "Maasi" or "Tai Ji" from now on as he cannot respect her anymore.

At Goenka's house, Akshara feels conflicted about whether to call Abhi or not.

Kairav enters the kitchen seeing Akshara cooking there. He asks her to get back with Abhimanyu as everything has been sorted now.

Akshara gives an incredulous look to Kairav to which he says that he knows the ups and downs of their relationship however, they (AbhiRa) have to ignore what other people say and focus on being together.

Suhasini comes there overhearing the conversation.

She advises the brother-sister duo that it won’t be easy to move on in their relationship and that there will be no place for mistakes in a second chance.

Akshara gets anxious listening to Suhasini and loses herself in the thoughts again while Abhimanyu awaits Akshara call anxiously.

Furthermore, Shefali reprimands Parth for supporting Mahima in her wrong deeds while the latter feels guilty and apologizes for his mistakes.

Shefali tells Parth that he lost his sister a year ago and today he has almost lost his brother and aunt (Manjari).

However, Manish doesn’t respond to her not liking what she said while Swarna tells him that in spite of how many misunderstandings occur, AbhiRa’s love will always overpower them.

At Birla's house, Anand calls out for Mahima who is leaving the house.

Mahima shouts that she cannot stay here anymore as nobody values her and treats her like a second-standard human.

No one stops Mahima as she proceeds to leave which makes her halt herself saying that the members of this house don’t care about relationships.

As Nishtha asks Mahima to stop being selfish and realize how her actions affected AbhiRa’s marriage, Mahima blasts at the poor girl.

With stone-cold eyes, Abhimanyu directly looks into Mahima’s raging eyes standing at the head of the staircase.

Assuring Mahima that she won’t be blamed for his mistakes, Abhimanyu states that living in the Birla house is her choice as no one will stop her.

Manjari advises Mahima to stay back and realize her mistakes that Anisha is gone forever and she shouldn’t leave her other daughter.

Further, both Abhimanyu and Akshara dress up nicely in ethnic clothes for the Dhanteras puja while debating inside to call each other.

Abhimanyu hears a group of friends singing around the bonfire and imagines himself and Akshara with them while he sings for Akshara apologizing to her.

Abhimanyu comes back to reality and his mobile rings which he picks up. He doesn’t hear any voice but recognizes the silence and says Akshara's name.

Akshara says that she wanted to thank him for standing up for the truth and saving Kairav.

Abhi starts apologizing to her but Akshara drops her mobile ending the call as Aarohi hastily comes into the room and stumbles into her.

Later, Akshara notices Aarohi getting frantic when she goes to take some printouts and the printer doesn’t work.

© Copyright tellybest.com, 2022, 2023. All Rights Reserved. Unauthorized use and/or duplication of any material from tellybest.com without written permission is strictly prohibited.
Cached Saved on: Monday 21st of November 2022 04:50:16 AMCached Disp on: Monday 5th of December 2022 01:04:00 AM