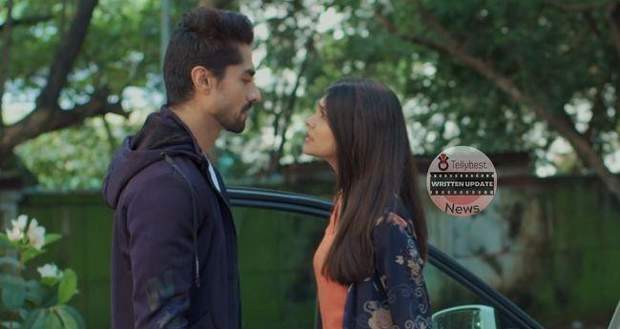 After a while, Abhimanyu finds Anand crying at a tea stall, inebriated and blaming himself for losing his practice, career and his daughter.

Meanwhile, Manish tells Akshara that only she and Abhimanyu will decide the fate of their relationship and they will all support her.

He also tells Akshara to listen to her heart which is trying to tell her something.

After a while, Abhimanyu brings Anand home while Mahima rudely thanks him and takes Anand away.

After a while, Neil gets a call from the hospital where he gets the news of Manjari’s demise.

Abhimanyu shouts in agony to hear the news and refuses to believe that Manjari is dead.

However, Neil rescues him from his thoughts telling him that Manjari is alright and showing improvement.

Feeling relieved, Abhimanyu tells Neil that he is feeling out of sorts and his every relation is suffering.

Meanwhile, Akshara is rationalising Abhimanyu’s comments about leaving her.

However, Suhasini tells Akshara to listen to her heart and not allow time to rule their relationship.

On the other hand, Abhimanyu realises that he is taking his family for granted for Akshara and decides to think for his family too like Akshara.

He calls his love a misunderstanding because it is taking away his other relationships and decides to put everything right.

Neil asks him to not take extreme measures in anger but Abhimanyu ignores him.

At the same time, Akshara also decides to put her and Abhimanyu's relationship right.

Later, Akshara and Abhimanyu are living their past memories in the solitude of night and imagine being together.

After a while, Akshara is standing in the courtyard when Akhilesh comes to apologise to her.

However, Akshara tells him that it's too late for apologies as the damage has been done.

Akshara jokes about problems getting attracted to her like magnets and basks in the love of her family.

Abhimanyu watches Akshara and her family looking content and reaches the final decision.

After a while, Goenkas are shocked to receive the divorce papers sent by Abhimanyu and hide them from Akshara.

Later, Abhimanyu tells Manjari about his doing and asks her to wake up and tell him that he has done the right thing.

After a while, the government doctor questions his presence at the hospital while Abhimanyu tells him that he is here as a son of a patient and they should think very carefully before keeping him away from his mother.

Meanwhile, Neil finds out about Abhimanyu sending divorce papers to Akshara and questions him about his irrationality.

© Copyright tellybest.com, 2022, 2023. All Rights Reserved. Unauthorized use and/or duplication of any material from tellybest.com without written permission is strictly prohibited.
Cached Saved on: Monday 21st of November 2022 12:11:59 PMCached Disp on: Thursday 1st of December 2022 01:40:09 AM