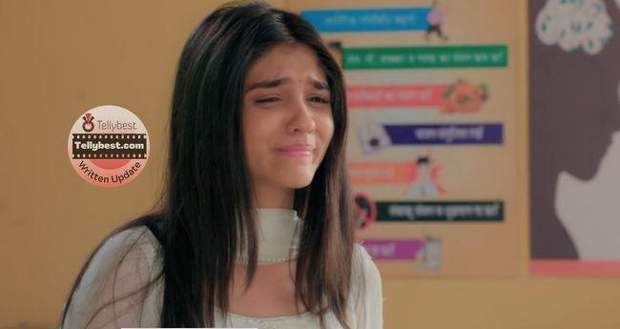 Harsh counsels him to go and rest for some time and he will keep vigil until he will come back.

Meanwhile, Akshara is surprised to find herself outside the girls' hostel while Abhinav tells her that there was no one when he needed help so now he makes it a point to help others when he can as there is less competition in this field.

Akshara looks at him sternly while Abhinav pretends to be scared and tells her not to slap him here as he has a reputation to maintain.

Afterwards, he loans Akshara some money and his contact details and assures her that she can return it whenever she can but not refuse his help.

Elsewhere, Abhimanyu holds Shivu in his arms seeking comfort in his embrace when Shefali comes to him with a food plate.

She tells him about Aarohi feeling better and that she is there for her but Akshara has no one.

Abhimanyu tells Shefali that he does not want to talk about Akshara.

Meanwhile, Akshara is sitting in the hostel room, hearing discussions about herself when suddenly she feels nauseous but it subsides before she reaches the bathroom.

The warden who has come to hand over the blankets questions Akshara if she is pregnant.

On the other hand, Shefali tells Abhimanyu that Akshara is missing as Swarna told her on a call that Akshara did not reach home yesterday.

Abhimanyu looks shocked and recalls Akshara’s call when he rudely told her to never call again.

He tells Shefali that he had talked to Akshara in the morning and she is not missing at all.

Elsewhere, Abhinav is questioning the warden for throwing Akshara out of the hostel when she was unwell.

The warden tells her that she wouldn’t have admitted her if she had known about her condition.

Abhinav feels disappointed at the warden’s behaviour who has judged Akshara based on her limited thinking and that he cannot expect them to show compassion to people who do not understand humanity.

Later, he wonders about Akshara who is neither aware of Pathankot nor does she know anyone there.

Meanwhile, Shefali questions Abhimanyu for not asking Akshara about her whereabouts on her call while he tells her to stop worrying about Akshara who has a habit of leaving without telling.

However, Shefali tells her that this time Akshara left because of his rash decision which at least she does not approve of.

Abhimanyu requests her to leave the topic as he does not want to discuss Akshara anymore who has already caused him so much pain.

Shefali tells him that what is worrying her is that both he and Akshara might be left alone forever.

Meanwhile, Akshara gets arrested for being confused as a sex worker and is taken for granted despite telling the police she belongs to a reputed family of Udaipur.

In the meantime, Abhinav arrives at the police station and claims Akshara as his wife while scolding the inspector for accusing and mixing his wife with the sex traffickers.

Elsewhere, Suhasini is worrying about Akshara when Abhimanyu comes there asking for Akshara.

Suhasini tells him that there is no news of Akshara yet and blames him for making Akshara leave in such a mental state.

Abhimanyu feels anxious and tells them that he divorced Akshara because he was tired of being a failure and not being able to protect his brother or his children.

He blames Akshara for not listening to him and causing so much grief.

© Copyright tellybest.com, 2022, 2023. All Rights Reserved. Unauthorized use and/or duplication of any material from tellybest.com without written permission is strictly prohibited.
Cached Saved on: Wednesday 25th of January 2023 12:53:55 PMCached Disp on: Wednesday 1st of February 2023 10:17:13 PM