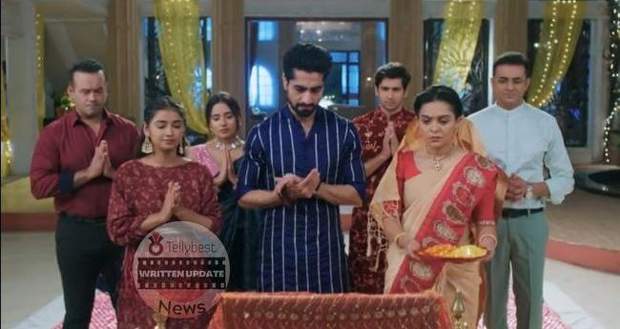 Today's Yeh Rishta Kya Kehlata Hai (YRKKH) 31st October 2022 episode starts with Akshara reprinting the last printed papers but could not understand what the papers are all about as only the last papers come out of it.

Meanwhile, Abhimanyu asks God to give him some indication.

Manjari who is observing Abhimanyu's absence of mind tells him to finish the task that her mind is stuck in and then perform the veneration as God understands half-hearted devotion.

Picking up the basket of sweets, Abhimanyu goes away while Manjari expresses her concern for AbhiRa’s coming back together after so many hardships.

At the Goenka house, Swarna tells Akshara to distribute the Holy sweets among the poor.

Meanwhile, Abhimanyu is driving towards Goenka's house to win Akshara back.

In the meantime, Akshara is also contemplating her relationship with Abhimanyu and whether she should resolve her differences with Abhimanyu or take more time to come to a decision.

Abhimanyu watches Akshara with the children and asks for a signal from Mahadev to approach her.

Just then Akshara’s sari get stuck in the car door just like the previous Dhanteras working as an ok signal for Abhimanyu.

During her struggle, Akshara feels Abhimanyu’s presence and turns around to see him coming towards her.

Abhimanyu stops in front of Akshara and they both stares into each other’s eyes.

In the meantime, Manish is going out to distribute sweets to the poor when Kairav offers to do it for him.

Abhimanyu tells her that his heart is singing "Haye Hukkoo Haye Hukko" and he wants to confess something to her but she does not have to answer him immediately.

Climbing the car upside down, Abhimanyu tells her that he loves her and will continue to love her like mad and she is her first love and he wants to love her like before and restart his life with her.

Akshara looks confused but Abhimanyu tells her that he is in no hurry for her answer and will wait for her as long as she wants and will not complain to her.

Akshara feels overwhelmed at Abhimanyu’s confession and runs back inside while Abhimanyu watches her go with a sad smile and distributes the sweets among the children.

Coming inside, Akshara collides with Kairav and asks her if Abhimanyu is outside.

Meanwhile, Abhimanyu feels himself falling in love again with Akshara.

He is driving his bike all around while feeling happiness inside him.

Afterwards, he comes back home where Neil, Nishtha and Shefali are waiting for him worriedly.

Abhimanyu happily asks them to practise for Neil’s sangeet ceremony.

He also tells Neil that with the guidance of Mahadev, he has confessed his feelings of love to Akshara.

Neil is curious to know Akshara’s answer but Abhimanyu tells him that he has not asked Akshara for an answer but only told her his feelings and is hoping for her to say the same when she is ready.

Meanwhile, Manjari hopes that Akshara also decides to give their relationship a second chance.

© Copyright tellybest.com, 2022, 2023. All Rights Reserved. Unauthorized use and/or duplication of any material from tellybest.com without written permission is strictly prohibited.
Cached Saved on: Monday 21st of November 2022 09:32:34 AMCached Disp on: Wednesday 7th of December 2022 03:15:50 PM