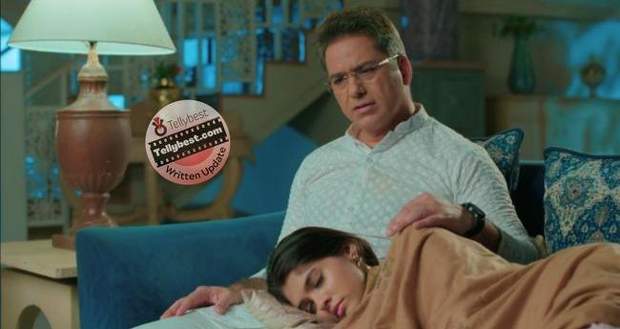 However, Abhimanyu refuses to sign the papers as this matter is related to his profession and he cannot risk Biral hospital’s reputation.

On the other hand, Abhimanyu tells Aarohi that this is not his decision he can take alone and that Neil is not experienced enough to handle the position.

However, Aarohi is unconcerned and tells him to choose carefully whether he wants the hospital or his wife.

Meanwhile, Manjari tells Akshara that she is disappointed in her and that she is only pretending to be happy but in reality, she is only doubting Abhimanyu’s intentions for Aarohi and Neil.

She reminds Akshara that she is a sensible person and it is expected of her that she can shoulder more burden than Aarohi.

Seeing Akshara’s worried face, Manjari tells her that she is the one who causes more stress to Abhimanyu as he is always working to keep her happy without caring for himself.

Meanwhile, Aarohi hands over the papers to Abhimanyu and tells him to take time and think carefully about what will Akshara feel after finding out about her condition.

Before leaving, Aarohi once again threatens Abhimanyu about telling Akshara the truth.

Abhimanyu lies to her about Aarohi bringing the toy and later observes her sad face and tells her to rest for a while.

In the meantime, Shefali finds Manjari in the kitchen looking unhappy and asks after her.

Manjari tells her that she has scolded someone and now is feeling guilty about it.

However, Shefali tells her to not worry as her scoldings are laced with love and she can later explain the person her reason for doing it.

In his room, Abhimanyu assures Akshara that he is fine and offers to bring milk for her. He also takes the papers with him telling Akshara that they are important hospital papers that Anand should have.

Later, Akshara brings Aarohi out of the house and slaps her.

Aarohi looks shocked when Akshara shows her the papers for transferring positions that she found in the library.

Akshara looks furious while she scolds Aarohi for daring to blackmail Abhimanyu and tells her that she is going to expose her in front of the whole family.

However, Aarohi tells her that her secret is entwined with Abhimanyu’s secret and that there is something that he is not willing to tell her.

Akshara looks shocked hearing that there is something Abhimanyu is hiding from her.

Meanwhile, Abhimanyu is searching for the papers in the library when Neil comes asking for Aarohi.

Abhimanyu assumes that Aarohi has taken the papers and goes to find her.

Elsewhere, Akshara tells Aarohi that it is between husband and wife but she should worry for herself whose secret is about to come out.

However, Aarohi gets scared and tells Akshara about her medical condition that it is very difficult for her to get pregnant and even if she conceives then her life will be in danger.

Akshara is shocked to hear the news and feels torn apart from the inside.