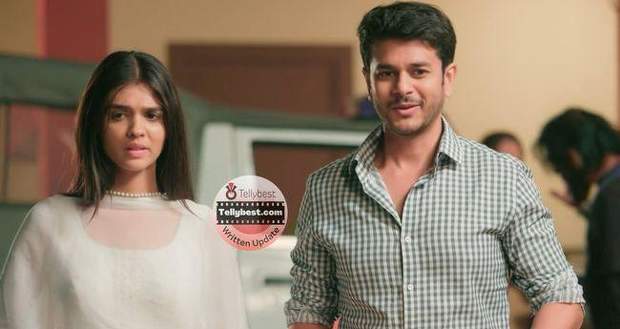 Today's Yeh Rishta Kya Kehlata Hai (YRKKH) 3rd January 2023 episode starts with Abhinav requesting his landlord to let Akshara live in the house for some time and succeeds in convincing him.

Afterwards, Abhinav asks Akshara what are her plans for the coming days and reminds her that she should return to her family after some time.

Meanwhile, Abhimanyu cannot get his thoughts under control and encounters an alcoholic who shows him a way to forget his pain.

Later, Abhimanyu gives in to the temptation and drowns his sorrow in the bottle.

Meanwhile, Abhinav brings Akshara to his boss to get her a job while Akshara promises him that she will not disappoint him.

Later, the manager eyes Akshara with devil eyes as she leaves the office.

After a while, Abhinav is celebrating Akshara’s job with a pastry and tells her his reason for not marrying so far.

As Abhinav goes to clean his shirt, Akshara encounters Priya who asks her to come with her and meet Manish.

Akshara tells her that she cannot go back with Manish as she will get trapped there and will not be able to move on.

Akshara tells Priya to tell Manish that she has called him to inform him that she is fine and will look after herself but cannot come home just yet.

After a while, Akshara apologises to Manish for not coming back with him and tells him that she does not want to be in a place where Abhimanyu’s uncaring behaviour hurts her more.

She also decides to keep the news of the baby secret from everyone and will bring him up alone as it is her responsibility now.

Later, Priya tells Manish about meeting Akshara and hesitantly conveys her message about not coming back.

Elsewhere, Parth and Shefali are worrying about Abhimanyu and find him in a drunk state inside his car.

The next day, Swarna and Suhasini call Aarohi asking about her health and inviting her to come home for a few days.

However, Aarohi refuses it and tells them that she is well-taken care of at the Birla house.

In the meantime, Manish returns home alone which surprises Swarna and Suhasini.

Later, Abhinav presents Akshara with a mobile phone and assures her that she can pay him back after she gets her salary.

Meanwhile, Swarna and Suhasini question Akshara’s decision about not coming back while Manish tells them that it is best for Akshara who will benefit from the change of scenery and would need time to come to terms with all that has happened to her.

In the meantime, Mahima comes to her cabin to find Abhimanyu nursing his hangover.

On being asked, she tells him that Manjari is better now and should be discharged today but needs care at home.

Reminding Abhimanyu about the previous day’s OT incident, Mahima tells him to consult a therapist as well.

After a while, Manish calls Abhimanyu to tell him about Akshara’s decision to not come back and that he has realised that they are not meant for each other as they always created problems whenever they are together.

Elsewhere, Abhinav praises Akshara to his boss while his boss sends him to pick up some guests as one driver is absent.

In the meantime, Abhimanyu gets Aarohi’s medical file and talks to Neil on seeing the ultrasound report of Aarohi.

Abhimanyu tells Neil that he will look after his child and will spend the rest of his life taking care of his child and his family as there is nothing left in his life anymore.

© Copyright tellybest.com, 2022, 2023. All Rights Reserved. Unauthorized use and/or duplication of any material from tellybest.com without written permission is strictly prohibited.
Cached Saved on: Wednesday 25th of January 2023 09:10:01 AMCached Disp on: Monday 6th of February 2023 06:18:13 AM