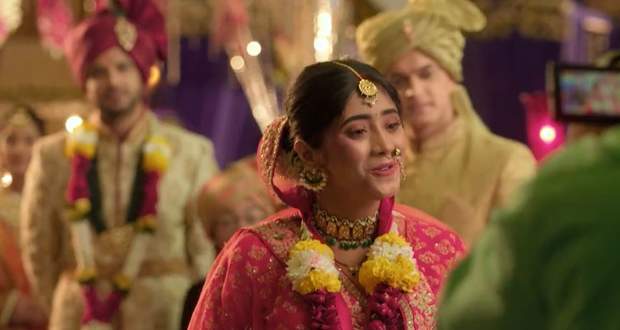 Today's Yeh Rishta Kya Kehlata Hai (YRKKH) 3 June 2021 episode starts with Sirat and Ranvir about to complete their marriage by carrying out the remaining rituals.

But, Sirat gets worried for Kartik as he leaves the wedding without any clue.

Later, Kartik goes to Narendranath to show him that his anger has no value in front of Sirat and Ranvir's love for each other.

Kartik gives a stern warning to Narendranath to stop creating problems in Sirat life as now he and his family are with her.

The marriage ceremony gets completed successfully and Sirat and Ranvir become husband-wife.

At the same time, the media reporters wait to cover Sirat's success story.

Initially, Sirat gets hesitant to speak but she starts giving her interview and enjoys expressing herself.

At a time, the reporter misunderstands Kartik as Sirat's husband as she just keeps on talking about Kartik and the support he gave to her for accomplishing her dreams.

Later, Ranvir requests his mother to stay but she refuses as she tells him his father won't like it.

© Copyright tellybest.com, 2020, 2021. All Rights Reserved. Unauthorized use and/or duplication of any material from tellybest.com without written permission is strictly prohibited.
Cached Saved on: Tuesday 7th of December 2021 11:02:51 PM