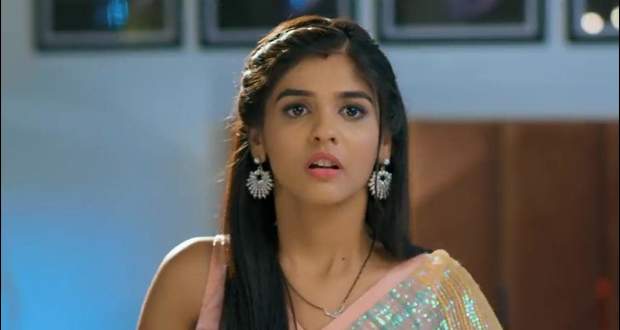 Akshara asks Abhimanyu who has he adopted and insists on meeting him while Abhimanyyu tells him that it is Neil.

Akshara is pleasantly surprised to hear that a child adopts another.

Abhimanyu tells her that Neil held him so tightly the first time they meet that it seems they have a bonding.

Meanwhile, Neil is walking in a hurry and collides with Aarohi making her fall and scattering the DNA reports.

Afterwards, Neil hands over the report to Aarohi and goes away while Aarohi is shocked to read the report and wonders whether Abimanyu knows about it or not.

At the same time, Abhimanyu and Akshara are discussing the orphanage.

Later Abhimanyu and Akshara go separate ways while Akshara tells him that soon they will talk about Harshvardhan and his relationship.

Aarohi is eating pastries while enjoying the news in the DNA report while Neil tells her not to eat pastries meant for function but she ignores him savouring the taste.

After a while, Abhimanyu drags Akshara into a corner to romance her while telling her that he is going to OT.

Akshara was expecting to be kissed but Abhimanyu stops in between thinking that the place is not good enough to share their first kiss while Akshara tells him that moments matter not the place and goes away.

After a while, Aarohi tells Akshara that Harshvardhan has an illegitimate child Neil which shocks Akshara and she runs to tell Abhimanyu but he is already inside the operation theatre.

Akshara goes to find Manjari and tells her that she knows about the secret that she had been hiding.

Manjari questions her about it while Akshara tells her that she is talking about a DNA test.

Just then the celebration begins and Manjari asks Akshara to make sure that Abhimanyu never finds out about it.

Aarohi overhears Manjari and smiles to herself.