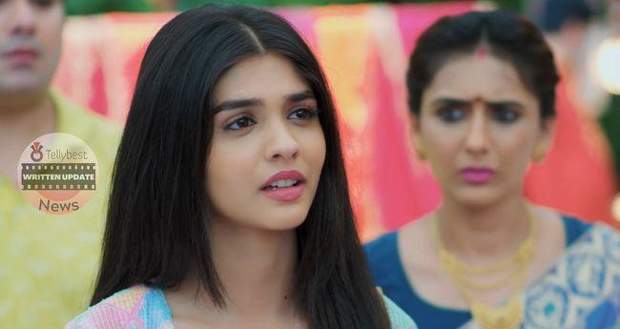 Today's Yeh Rishta Kya Kehlata Hai (YRKKH) 3rd October 2022 episode starts with the Goenka and the Birla family worrying about Akshara and Abhimanyu as they find their children overeating cake to get rid of their pains.

On the other hand, Vansh chides Aarohi when she rolls her eyes commenting on for Akshara acting stupidly.

Swarna asks Akshara to talk while Neil tries to make Abhimanyu open up, however, they get disappointed as none of them acknowledge their pain while being in deep agony.

Later in the night, Akshara stumbles her way to the Birla house in not so sober state, calling out for Abhimanyu while climbing up the iron gates of the house.

Akshara shouts dramatically "The Mr. The Abhimanyu The Birla" asking Abhimanyu to come out as the one and only Akshara Goenka has come to see him.

The gate swings with Akshara’s weight who is latching onto it just like a lizard, although she gets irritated and drops down.

Akshara yells that she has even made notes on her arm on what to talk to him as she did not have time to prepare a proper presentation.

However, as she starts reading “You Chid Chide, Nachade Sadu Insaan” (You grump annoying irritating man) written on her arm, she couldn't understand her own handwriting for which she makes a cute face.

Meanwhile, Abhimanyu lies outside the closed doors of the Goenka Villa while he calls for Akshara.

He finds a bird cage hanging there outside and loudly announces that today they even received the award for the “Best Failed Couple of The Year” whose credit he wants to share with her.

On the other hand, Akshara says in a secretive tone that Akshara is broken from inside.

Moreover, she says that the award for the most "Tooteli Futeli" (broken) personality goes to "Yours Truly Me" (Akshara).

Meanwhile, Abhimanyu says that he wants to devote the trophy to her legs and challenges her to come out.

Akshara lies down on the doorsteps of the Birla house the same way Abhimanyu lies at Goenka Villa in his drunken state.

Later, in the morning, both wake up after sleeping off their intoxication on the doorsteps of their respective houses with their faces fear-stricken.

Worrying about anyone finding them there and not wanting their exes to think of them being desperate both leave for their homes.

Furthermore, Akshara prepares all the documents to get Manish and Kairav out of the prison while on the other hand, Abhimanyu prepares for the hospital hearing.

Meanwhile, Aarohi talks to her boyfriend, complaining to him for not giving her enough time and getting upset.

Downstairs, Swarna tells Akshara about their wish for celebrating Navratri for which Akshara encourages her assuring that Manish and Kairav will join them too.

© Copyright tellybest.com, 2022, 2023. All Rights Reserved. Unauthorized use and/or duplication of any material from tellybest.com without written permission is strictly prohibited.
Cached Saved on: Monday 21st of November 2022 03:28:47 AMCached Disp on: Tuesday 6th of December 2022 01:35:45 PM