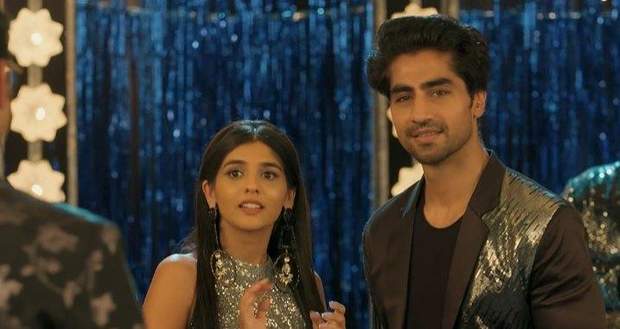 Today's Yeh Rishta Kya Kehlata Hai (YRKKH) 4th August 2022 episode starts with Abhimanyu coming to Anisha to talk to her about tonight's debacle, while Anisha complains to him about Kairav’s attitude despite claiming to love her.

Abhimanyu assures his support to her whatever, her decision is but asks her to be firm in it.

In the meantime, Akshara is recalling Mahima’s harsh comments when Abhimanyu comes in and asks Akshara to forget everything and live in the moment where they only have happy moments to celebrate.

Asking Akshara to blow the magic candle Abhimanyu assures Akshara that their love is like this candle that will only end when their lives will end.

Afterwards, Abhimanyu offers cake to Akshara who eats it and then applies it to her cheek offering it to Abhimanyu to eat from there.

The next morning, Abhimanyu waits for Akshara to get ready and teases her after she gets out.

Meanwhile, Anisha talks to Kairav and tells him that she is ready to wait as long as he needs to get to a decision.

However, Suhasini tells Kairav that Anisha is playing with his heart and he should cut her off from his life if he does not want to regret it later.

Aarohi also supports Suhasini in her decision to tell Kairav to not marry that psycho.

Meanwhile, Abhimanyu and Akshara find Anisha in the kitchen who has prepared a birthday roll for Akshara.

Both Abhimanyu and Akshara comfort her saying they will support her in her decision.

Later Abhimanyu and Akshara go out on a drive where Abhimanyu has planned several surprises for Akshara.

Abhimanyu brings Akshara a plant which is called AbhiRa and tells her that they will come here to meet it and see it grow into a strong tree with their love and care.

On the other hand, Mahima and Anand are fighting over Anisha while Anand blames Mahima for not caring for the children enough to grow up to be someone strong and settled.

Later, at the dinner table, Anisha is ignoring her calls and explains to everyone that the call is work-related and nothing important.

Just then, Akshara sees Kairav walking in with his family.

© Copyright tellybest.com, 2022, 2023. All Rights Reserved. Unauthorized use and/or duplication of any material from tellybest.com without written permission is strictly prohibited.
Cached Saved on: Wednesday 25th of January 2023 12:36:45 PMCached Disp on: Thursday 9th of February 2023 08:45:15 AM