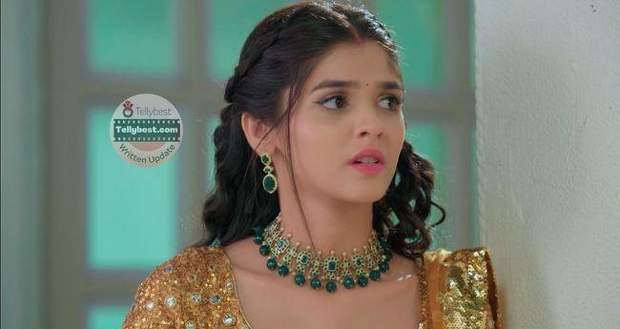 Meanwhile, Akshara looks as if she has lost the world.

In the meantime, Abhimanyu closes his eyes to get control of his anger towards Aarohi and is shocked to see Akshara gone when he opens his eyes.

Meanwhile, Akshara is running madly thinking about all the things everyone said in the past about her being a mother and cries incessantly.

In the meantime, Abhimanyu also runs on the road searching for Akshara everywhere.

On the other hand, Aarohi is feeling scared of Abhimanyu’s wrath and berates herself for revealing the truth to Akshara.

Just then Neil comes to Arohi asking where she is and telling her about her friend who has been waiting for her.

Just then Aarohi feels nauseated and runs to the washroom.

Elsewhere, Akshara is crying behind a tree when she hears a mother shout for help.

Akshara turns around to access the situation and observes a baby pram moving at a fast speed without assistance.

Abhimanyu also hears the mother cry for help and looks around.

Akshara increases her pace while Abimanyu also rushes to Akshara horrified at the danger both the child and Akshara are in.

Akshara picks up the baby while Abhimanyu drags both of them aside just before the car hits the pram and it flies in the sky with its force and crashes into the ground.

Akshara asks Abhimanyu to check on the child when her mother comes running to them and thanks them for saving her child.

She feels gratitude towards them and blesses them saying that they will become very good parents and that may God keep them safe and healthy.

Akshara could not hear the blessing in that woman’s words but feels empty remembering her loss.

Meanwhile, Shefali asks about Abhimanyu and Akshara when Neil comes running to them saying that he has something to tell them.

Akshara tells Abhimanyu tearfully that no one will call her a mother now and cries at the injustice of being taken away the privilege of becoming a parent.

Abhimanyu feels Akshara’s pain seeping into his heart and tells her that he is sorry to say that Aarohi is right.

Akshara also apologises to him that he will not become a father because of her.

She asks him why did he not tell her and bore everything alone.

Both of them cry in agony while wishing to not go through this all.

Later, Akshara recalls how Aarohi manipulated Abhimanyu because of her.

After a while, both Abhimanyu and Akshara resolve to be together with each other and face the challenges that await them.

With dead feet both Abhimanyu retraces their path to return home.

At home, Abhimanyu and Akshara arrive home looking forlorn and wonder how they will tell their family.

Inside the house, Neil tells Abhimanyu and Akshara that he is very happy that his going to be a father and that Aarohi is pregnant.

Akshara and Abhimanyu are shocked to hear this news.

© Copyright tellybest.com, 2022, 2023. All Rights Reserved. Unauthorized use and/or duplication of any material from tellybest.com without written permission is strictly prohibited.
Cached Saved on: Wednesday 25th of January 2023 10:17:56 AMCached Disp on: Tuesday 31st of January 2023 07:33:46 PM