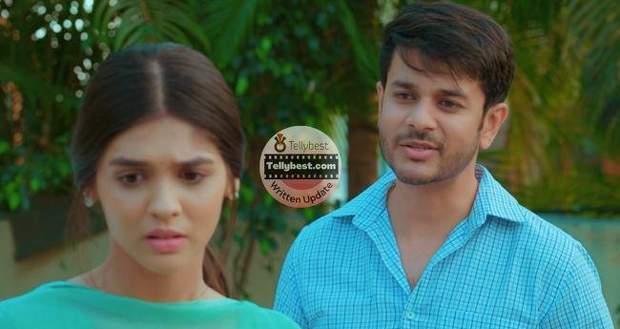 Meanwhile, Abhinav arrives in time and attacks his boss to save Akshara.

Abhinav's boss threatens to fire Abhinav while Abhinav tells him that he fires him from being his boss.

Just then Akshara begins to have stomach pain and Abhinav takes her to the clinic where Akshara fills her name on the form and refuses to write her father’s name.

Meanwhile, Manjari is grieving Neil’s death when Aarohi comes running down the stairs shouting that she cannot do it anymore and they should let her go.

On being asked, Shefali tells Abhimanyu that Aarohi was watching Shivu but he hurts himself with his toy which scared her.

Just then Aarohi becomes hysterical and tells everyone that she cannot bring up this baby on her own without Neil.

Seeing Aarohi’s hysteria, Mahima suggests to Aarohi to consider all her options and terminate the pregnancy if she thinks she cannot handle it.

Manjari and others are shocked to hear Mahima’s suggestion.

Manjari berates Mahima for even thinking like this and assures Aarohi that she will bring up her baby and all the family will be there to help her.

Suhasini who is also there tells Manjari that she understands her feelings but she has experienced this bitter truth after losing her husband at a very young age.

Suhasini tells Manjari that she use to get angry at the idea of remarriage after her husband's death but life taught her that spending life alone is not easy and no matter how much everyone says that they will be there.

It is the reason why she has made Manish remarry and Aarohi should also marry again.

She also tells them she has brought up Akshara, Aarohi and Kairav alone and she knows how difficult it is.

Mahima tells everyone that they should not hurry the decision and thinks clearly.

Just then Harshvardhan speaks up in favour of Manjari and tells them that they all will look after Neil’s child and will not let Aarohi feel alone and isolated.

Swarna also agrees with Harshvardhan and assures Aarohi to not feel overwhelmed.

Just then Abhimanyu tells everyone to be quiet for a few minutes.

Abhimanyu tells Aarohi that she will have to take the decision in this matter and they will all accept her decision.

Meanwhile, Abhinav gets worried to hear about Akshara’s complications in the pregnancy and tells Akshara that she should not punish her child for her marital problems.

He tells her that she should not alienate herself from her family at a time like this and reminds Akshara of all the hardships she has gone through in such a short time.

He tells Akshara that there is a possibility that this child can solve the problems that she and her husband are facing at the moment.

Meanwhile, Aarohi has come to a decision about keeping the child and that she cannot let anything happen to Neil’s child.

Abhimanyu looks at Neil's picture and reaffirms his decision to look after his child.