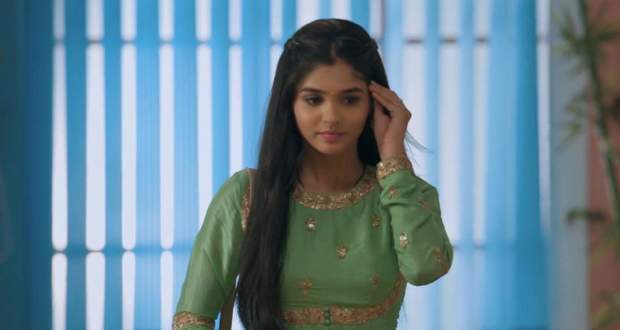 Meanwhile, Dr Rohan tells Abhimanyu that Akshara is seen going after Abhimanyu and still inside.

Abhimanyu immediately rushes inside while Anand calls after him.

In the meantime, Akshara is satisfied that Abhimanyu is not here and is about to leave when she realises her bracelet is missing and goes to search for it.

On the other hand, Manjari tells Harshvardhan about the fire in the hospital.

Meanwhile, Abhimanyu re-enters the wing and searches for Akshara and finds her bracelet.

Just then Akshara’s coughing attracts him and he goes in the direction of the sound.

Later, Abhimanyu finds Akshara who is out of breath.

Abhimanyu tells her to hum to even her breathing and later they begin to fight for coming after each other.

Akshara tells him about the bracelet which Abhimanyu shows to her and tied himself.

As they were going out, a loud burst of fire make them take refuge under the table.

Both Akshara and Abhimanyu talk with their eyes and express their pain of past days while sitting under the table.

Outside the wing, the fire brigade has arrived and is asked to quickly control the fire.

Both Akshara and Abhimanyu apologise to each other.

Abhimanyu tells Akshara that loving someone means trying to support the partner when they need it.

After a while, an attendant comes and tells about the culprit Sanjay has been caught.

They also update them that he is the same man who was beaten by Abhimanyu in the morning and harassed Akshara.

Inside the wing, Abhimanyu and Akshara are expressing their undying love for each other when a pillar falls on the table and would have broken it had Abhimanyu not stopped it.

He asked Akshara to get out and tries to hold the table upright.

Just then, Akshara finds a stool that they installed under the table to steady it long enough for Abhimanyu to escape.

Later, a burst of flame catches them and they fall down and faint.

Abhimanyu calls for help after regaining consciousness and carries Akshara in his fragile state.

© Copyright tellybest.com, 2022, 2023. All Rights Reserved. Unauthorized use and/or duplication of any material from tellybest.com without written permission is strictly prohibited.
Cached Saved on: Wednesday 25th of January 2023 01:23:46 PMCached Disp on: Thursday 9th of February 2023 07:35:47 AM