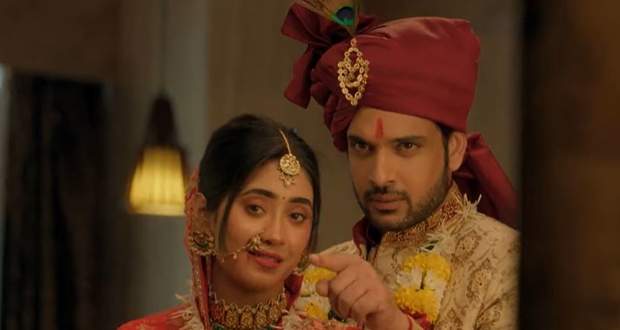 Today's Yeh Rishta Kya Kehlata Hai (YRKKH) 4 June 2021 episode starts with Sirat getting emotional while Kartik calms her and gifts her the same bracelet that had broken.

Maudi asks her if she feels good while Sirat says that she is very happy which is why she isn't crying.

She says that she will try making everyone laugh after which Kairav gifts her a scrapbook made by him.

She does the Bidaai ceremony and starts punching the air saying that she is punching away all the negativity from the house.

Kartik sends them off in the car while she comes back to return Kartik's handkerchief.

However, he ties it around her and Ranvir's hand and again sends them off while Kairav gets emotional.

Goenka's try to cheer up Kairav while Ranvir welcomes Sirat into their new house.

Kartik sits by the pool and misses Sirat while Ranvir admires already sleeping Sirat and sleeps beside her holding her Pallu.