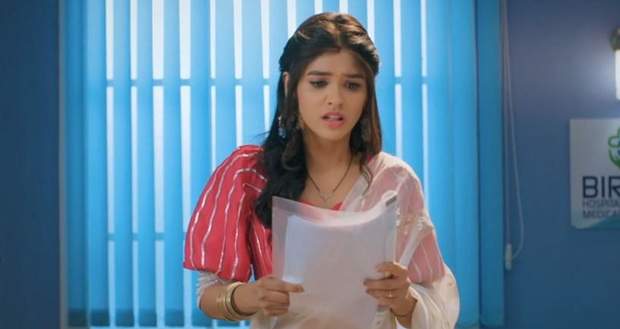 Meanwhile, Abhimanyu is rushing toward the function.

On the other hand, Aarohi leaves the file near Akshara’s table which she picks up after finding it.

Afterwards, Aarohi tells Neil that Harshvardhan needs the file that Akshara is holding and asks him to get it for him.

Neil reads the report just as Harshvardhan berates him for not doing his job and calls him an orphan which instigates Neil who tells him that he is not an orphan.

Manjari who is watching Neil gets anxious to see her secret out while the press also picks up the tension between Harshvardhan and Neil.

Abhimanyu comes to Neil worrying about his outburst while Neil gives him the crushed paper.

Before Abhimanyu can understand what is making Neil panic, Manjari faints and Abhimanyu carries her to the emergency room.

The available press becomes curious at Neil’s abrupt behaviour and asks Shefali to clarify while Manish handles the situation and they all go where Manjari is.

Akshara is worried at Neil’s outburst and worries about Manjari’s secret coming out.

While treating Manjari, Abhimanyu is astonished at Manjari calling Akshara by her full name.

Abhimanyu is about to open the DNA report when the doctor comes with Manjari’s medicine and he keeps the paper in his pocket.

On the other hand, Goenkas are worried about Neil who is usually very jolly and have happy go lucky personality while Aarohi observes all the drama and enjoys it thoroughly.

Harshvardhan is venting his anger about Neil for spoiling the occasion.

Abhimanyu is wondering about the scene at the hospital while driving a bike which stops in the middle of the road.

Taking out the handkerchief from his pocket he drops the crushed paper of the DNA report on the ground.

Abhimanyu picks it up and reads the report and is shocked at the results.