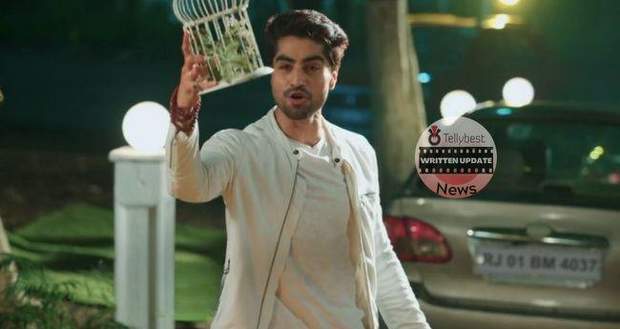 Meanwhile, Akshara along with Vansh meets the judge to get Manish and Kairav bailed out of the prison.

On the other hand, at the Goenka house which is decorated beautifully for the Navratri celebration, suddenly the electricity goes off.

The joy of all the members of the Goenka family seems to have no bounds as Akshara and Vansh bring Kairav and Manish home.

Meanwhile, Abhimanyu and Harshvardhan return with the ownership of the hospital and also bring bad news that Anand's medical license is cancelled.

At Goenka house, in Aarohi's room, Aarohi gets surprised by her boyfriend who has come to see her.

Aarohi pretends to be upset and her boyfriend hugs her from behind who is none other than Neil Birla.

Neil picks up Aarohi in his arms in the bridal style and gives a twirl to her.

Aarohi wonders if she should tell Neil about Kairav and Manish's bail but is not sure of his reaction.

Thus, she asks Neil to go out from another corridor to prevent him from seeing Kairav and Manish.

Akhilesh, at the same time, passes by from there and catches Neil snooping around the house.

Dragging Neil to the main hall, Akhilesh drops him on the floor in front of all the family members.

Akhilesh accuses Neil of being sent by Abhimanyu to talk to Akshara when she asks Neil about the reason behind his secret visit.

Neil gets scared as Akhilesh mentions calling Abhimanyu to inform him about his brother's actions.

Akshara asks Neil again the reason and picks up from the situation stating that he had come to see Akshara to talk about divorce papers.

On the other hand, at the hospital, Abhimanyu is worried about Neil's absence.

Abhimanyu hopes that Neil is not stuck in any problem as there are already many things going on at home.

Meanwhile, Akhilesh reprimands Neil a lot and asks him to tell Abhimanyu that the day he sent the separation papers to Akshara, the relationship between Goenkas and Birla was broken at that moment.

Neil's mobile rings with Abhimanyu's name flashing on it which Akshara sees.

Neil meets Akshara's eyes guiltily who nods at him after which Neil picks up the phone from the floor and starts to leave.

Before turning around, Neil exchanges a glance with Aarohi who stands behind Akshara looking worried.

Akshara notices Neil's attention on Aarohi and turns back to see her.

Further on, Akshara calms everyone at her house and encourages them for the puja.

© Copyright tellybest.com, 2022, 2023. All Rights Reserved. Unauthorized use and/or duplication of any material from tellybest.com without written permission is strictly prohibited.
Cached Saved on: Monday 21st of November 2022 08:43:01 AMCached Disp on: Tuesday 6th of December 2022 12:54:34 PM